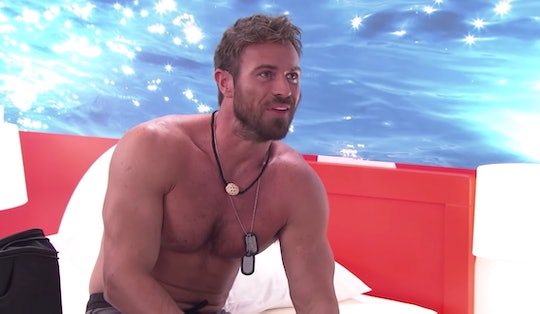 Ex On The Beach is back for a second season — and you may recognize a few of the cast members. For example, joining the tropical island this season is Chad Johnson of The Bachelor. Chad's fans from his Bach days may be wondering: Does Chad hook up on Ex On The Beach?

Yes, Chad does hook up on Ex On The Beach. Is anyone really surprised? In a montage of clips from the season to come that plays at the beginning of the season premiere, Chad is seen making out with a brunette woman, who appears to be Nicole of The Challenge. A voiceover (that sounds like Chad) plays during the kiss, saying: "I'm straight falling in love with her."

But as the episode progresses, Chad quickly finds himself making out with another woman: Morgan of Big Brother. This love triangle between Chad, Morgan, and Nicole begins to rear its head very early on in the season: after all, it's still the season premiere, the singles' first night on the island, and the exes haven't even showed up yet.

In case you are new to Ex On The Beach, here's how the reality show works. Producers put a group of reality show stars together on a tropical island. The producers tell the contestants that they're simply there to find love; however, wrench after wrench is thrown on the island when the contestants' ex-partners show up. As the plot description of the season premiere explains: "A group of singles thinks they're on a sexy getaway, but their pasts are put on blast when they realize their exes will be joining them, and a painful secret is revealed."

In fact, in the opening moments of the first episode this season, in which the cast members are all enjoying a masquerade party on a tropical island, host Romeo reveals that they are actually on Ex On The Beach. He also reveals that this season is going to really dive into the question: "Will you be able to get over your ex?" Expect lie detector tests with dramatic red lighting, y'all.

Chad is best known for competing on season 12 of The Bachelorette, where he competed for the heart of Joelle "JoJo" Fletcher, as well as on Bachelor in Paradise. Even though he was sent home during Week 4 of The Bachelorette and during Week 1 of Bachelor in Paradise, he has remained one of the most infamous Bachelor contestants of the past several years. Chad has clearly capitalized on his villain persona — he even brags about his reputation to a few of the Ex On The Beach women within the first 10 minutes of the season premiere.

One person who Chad most likely won't be hooking up with this season is Farrah Abraham, who is famous for starring on Teen Mom. In one scene on the show, which MTV shared a clip of on Twitter, Chad and Farrah get into a huge fight in front of the whole gang.

As mentioned above, Chad's relationships with both Nicole and Morgan kicked off in the first episode of the season. That means that much more ~romantic~ Chad content is likely on the way — unless he gets sent home early in the season like he usually does.