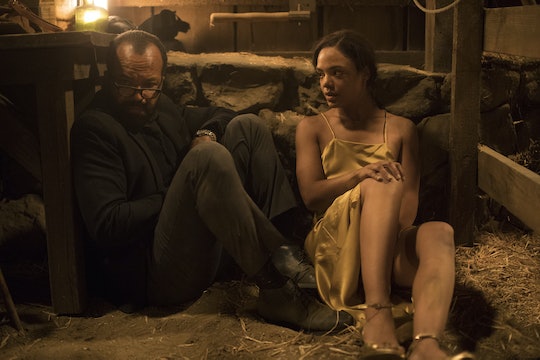 Bernard's storyline in the second season of Westworld has followed two distinct timelines: one tackles the immediate aftermath of Dolores' robot rebellion, while the other picks up two weeks later. Bernard seemed badly shaken in the latter, and the other characters appeared to react to him differently as well. Charlotte in particular was very suspicious when she crossed paths with him again. But could there be a reason for that? Does Charlotte know Bernard is a host on Westworld?

There's little evidence to support that in the four episodes of Season 2 that have aired so far, but the shift in Charlotte's treatment of Bernard did seem strange. She and Bernard were friendly when they were on the run together and it was clear that she trusted him to help with her mission to locate Peter Abernathy. She let Bernard in on secret information, like her plan to smuggle Peter out of the park, and counted on his assistance. She eventually abandoned him in the park, but there didn't seem to be any ill will between them.

However, when Bernard was found on the beach a couple of weeks later, almost everyone except Ashley Stubbs was being oddly callous to him. He was obviously in bad shape, but the other Delos employees were brusque, demanding of information before offering him assistance. Charlotte was the same way, and it could have been because she had finally figured out his secret.

That has become a popular theory amongst fans of the show. Officially, Elsie is the only human who knows that Bernard is a host, because she had to help heal the damage inflicted by his gunshot wound from Season 1. The other hosts figure it out fairly easily, but so far all the humans have been in the dark. However, they might have learned a lot in that two week period and there's a shot from the trailer that indicates that Charlotte specifically discovered the truth.

Reddit user solomars took a screengrab from a Season 2 promo that showed Charlotte standing beside several Bernards: there were at least three host bodies designed to look like him, with more potentially lurking under tarps in the distance. They appeared to be in storage, maybe because they were older models; one had a face like the young Ford host, which opened up to reveal machinery beneath. Charlotte appeared to be wearing the same outfit as when she greeted Bernard after two weeks apart.

The simplest explanation for this is that Charlotte somehow stumbled upon a storage facility with all of the previous Bernard models locked away inside it. Considering all the unknown lairs located in the park — like the facility Bernard and Charlotte first hid out in, and the lab in the cave where James Delos was being kept — it wouldn't be a surprise to find out that Ford kept all his previous Bernardbots somewhere hidden.

Since the promo revealed that Charlotte will come into contact with these former Bernards at some point, it's fair to assume that she might know he's a host when they meet up again. And if she does, then it would make sense. Bernard has come very close to his host identity being exposed more than once, especially as he glitched throughout the early episodes. He seems to be having trouble with his programming once again in the present timeline after whatever happened to him in the interim, so even if Charlotte hadn't found the backup Bernards, he was in danger of being revealed.

It's still just a theory, but it certainly seems like Charlotte knows more about Bernard than she's letting on.