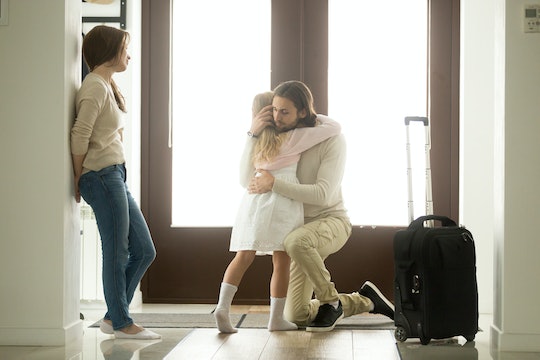 Cheating Doesn't Always Affect Child Custody Outcomes, But Here's When It Does

Divorce can be a traumatic process under the best of circumstances, but when a marriage ends over one spouse's infidelity, the split can be even more difficult to navigate — and that's especially true when a couple has children. One of the most challenging aspects of divorce for families is figuring out who gets custody of the kids, and wives or husbands who've been cheated on might feel as if they're entitled to be the primary caregiver (or even like their soon-to-be ex can no longer be trusted). But does cheating affect child custody arrangements from a legal perspective?

As with most things related to divorce, it seems, there is no easy answer to this question. While cheating still does carry some stigma with it, just because a partner cheated doesn't mean that the court will automatically assume they're an unfit parent. As collaborative lawyer and family mediator Katherine Eisold Miller, partner at The Miller Law Group, wrote for the Huffington Post, adultery is "unlikely to affect a custody determination so long as the wayward spouse has not carried on the relationship in front of the children or exposed them to inappropriate people or situations during the course of the affair."

Indeed: It's when the unfaithful spouse starts wanting their boyfriend or girlfriend to be a presence in their child's life that custody battles can get tricky, as Eric Broder, a family law attorney and partner at Broder & Orland LLC in Westport, CT, tells Romper.

"If it's supposed to be the father's time with the child, you don't want him bringing his flavor of the week around," Broder says. "And who knows what kind of person this is?" he adds (referring to the "flavor").

Naturally, the character of the "other" woman or man is a common concern for parents seeking primary custody, Broder explains, which is completely understandable: If your husband cheated, you'd probably have some less-than-positive feelings about his new flame right off the bat... and then you're supposed to be okay with letting your babies hang out with this new person who broke up your marriage? ("Over my dead body" is a phrase that comes to mind.)

In cases like these, legal agreements can be made that will help both parties to feel more comfortable with the situation, Broder says. If the extra-marital affair turns into a long-term relationship, for example, or if either parent wants to start dating again, they can agree that neither party will introduce the kids to a significant other without first meeting certain guidelines: They might have to get permission from their ex-spouse, take their child to talk to a therapist about the change, or mandate a waiting period (such as neither parent bringing a new love interest around the kids for six months post-divorce, etc.).

"In a good situation, the father will say 'Hey, I've been seeing this person, let's talk to the therapist about how we should tell the kids,'" Broder says.

Unfortunately, not every situation is a "good" one — as many celebrity splits have proven. And truth be told, you probably know a few people who didn't go through the most amicable divorce either, especially when infidelity was part of the picture.

All in all, essentially, it's not the cheating itself that influences a custody arrangement, it's how the extramarital relationship (or others) will affect kids in the future that can be a factor.

As Broder points out, "You can be a parent who had an affair and still be a great parent, and hopefully both parents can look past that and focus on the kids."