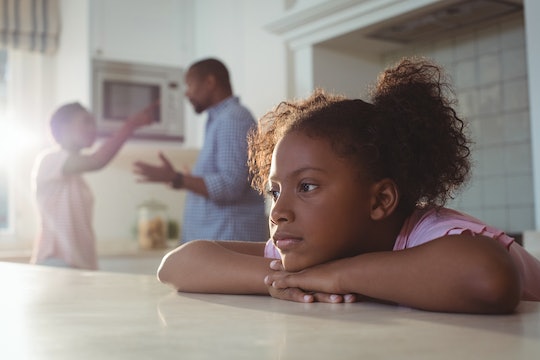 Cheating Can Affect How Much One Pays For Child Support, But Not In The Way You'd Expect

There are few things in life more devastating than being cheated on by a spouse, and the aftermath can be a nightmare — particularly when kids are involved. If an affair leads to divorce (which it often does), parents are forced to make incredibly important decisions for their children while dealing with such judgment-impairing feelings as anger, guilt, and resentment. The law, of course, remains impartial, no matter how heated proceedings get, and infidelity isn't a crime (in most states, anyway). So does cheating affect how much child support the wronged parent is awarded?

If you're in the position of having to start a new life for yourself and your kids because your partner had a fling (or even a full-fledged relationship on the side), you might feel like your soon-to-be ex owes you more monetary compensation than you would if you made a mutual decision to part ways. But that's probably not how a judge will feel about the situation, as Eric Broder, a family law attorney and partner at Broder & Orland LLC in Westport, CT, tells Romper.

"The simple answer is no, having an affair does not affect child support, but there are some exceptions," he says.

Laws do differ a little bit from state to state, Broder points out. But not by much: As an article on DivorceForce stated, "In a few states, infidelity can be considered grounds for legally ending a marriage, but in most, evidence of 'fault' on the part of a spouse is not required or even relevant." In other words, because of "no-fault" divorce laws, courts don't really care why you're getting a divorce, so they're not going to "punish" your ex by demanding larger-than-usual child support payments. (Fun fact: Adultery is still against the law in 21 states, but is "rarely prosecuted as a criminal offense," according to the Los Angeles Times.)

Child support is determined based on the income of each parent and how many dependents are involved. The parent who does not have primary physical custody is typically ordered to make monthly payments to the other parent. Whether or not the non-custodial parent's cheating led to the split generally doesn't have any bearing on how those payments are determined, Broder explains — though there are certain circumstances in which lawyers can use infidelity as leverage. For example, let's say a husband who cheats on his wife moves in with his new girlfriend, who then ends up footing all his bills.

"If a guy is paying child support and someone is giving him free rent and paying for all his expenses, the court can impute income to him," Broder says.

So if he makes $100,000 a year, say, the court could decide he's really making $130,000 a year because he's not paying for any living expenses, which would then influence the amount of money he has to pay in child support.

Another factor that can play into child support payments, according to Broder, is the guilt that unfaithful spouses often feel. Parents who've cheated might be persuaded to pay more in child support because they feel sorry for breaking up their family, but those remorseful feelings won't last forever, he warns.

"If they're feeling guilty the time to strike is now, because after a while the guilt doesn't go too far," he says.

"People don't just wake up and have an affair, there are usually a lot of reasons," he continues. "They start thinking about why they had the affair and the guilt dissipates."

Hammering out the details of a divorce is never easy, but it can be even harder in the wake of an affair. At the end of the day, the best advice for parents is to focus on the kids. And for those who've been cheated on, Broder has an interesting observation to share that might bring some schadenfreude-induced comfort:

"Most of the time, the relationship that breaks up a marriage doesn't last," he notes.

"It usually ends after the divorce."