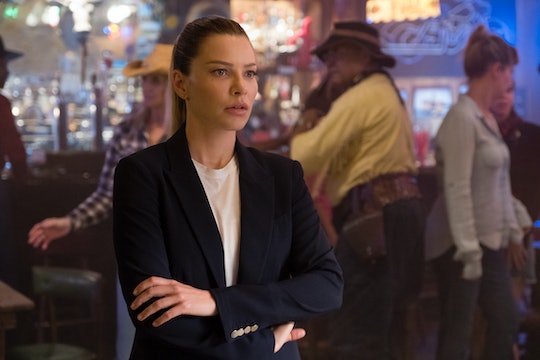 Chloe Decker always believed Lucifer’s devil persona was a schtick, but at the end of Season 3, she finally saw his true devil face. After the cliffhanger finale, Fox aired extra episodes that threw her story off track. The series returns with a new home at Netflix, and fans are hoping it picks up where the finale left off. So, does Chloe know Lucifer is the Devil in Season 4?

In a trailer for the new season, you can see that Chloe does remember seeing Lucifer’s face, and she now knows that he’s really the Devil. “After I saw your face, I just felt lost,” she tells him in one scene. “I just want to get back to work.” Lucifer goes on to tell Linda that he thinks Chloe is in denial, and she tells him he needs to take it slow. This means that cat is officially out of the bag, and pretty much everyone on the show, save Ella and Dan, know that Lucifer Morningstar is exactly who he claims to be.

Season 3 left some fans confused, because after the finale, Fox cancelled the show and aired two bonus episodes meant for Season 4 — “Boo Normal” and “Once Upon a Time” — that made it feel as if Chloe never saw Lucifer’s true face. According to Deadline, Fox’s synopsis for one of the episodes described a fourth season in which “Lucifer’s mom creates an alternate dimension” and “Lucifer now lives in a world where he not only has never met Chloe (Lauren German), but is granted the freedom of choice.”

Luckily, when Netflix swooped in to save the series, Lucifer showrunners were able to make things right and start the fourth season where the Season 3 finale left off. In an interview with The Wrap, lead actor Tom Ellis revealed that the new season will start with Chloe trying to come to terms with what she saw. “When we open the season, we realize that it’s a month after the reveal at the end of Season 3 and the detective disappeared,” he said. “She kind of left that scene when the police swarmed in and Lucifer never saw her again, she took her child and she went somewhere. And he hasn’t heard from her, he’s heard nothing at all. So he’s been wallowing in this kind of self hatred for a month.”

Ellis also teased that Chloe may be working on a way to bring Lucifer down, perhaps with the help of someone she met while she was away. “Then it turns out that in that month that Chloe spent away, she didn’t just go on holiday, she went and she started doing a lot of research about the devil and she went to a place where she believes she could talk to someone about it,” Ellis told the outlet. “And her path is crossed with a character called Father Kinley. And we find out that maybe Chloe is plotting against Lucifer to try to send him back to hell.”

After three season of build up, it’s a relief to know that the idea of Chloe knowing Lucifer’s true identity didn’t just fizzle to the wayside. All the juicy reactions you hoped to see from her should be addressed in Season 4, which lucky for you, is currently streaming on Netflix.