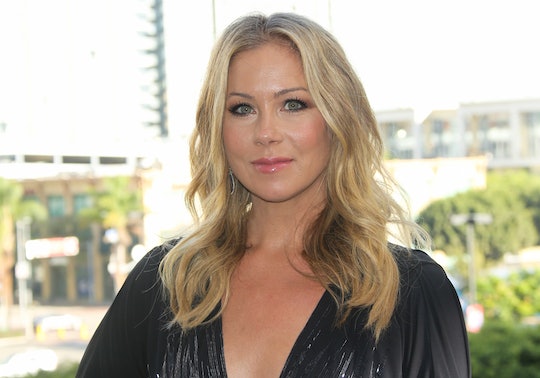 Christina Applegate Once Said Her Daughter Has "Opened My Whole Soul"

Actress Christina Applegate is no stranger to playing a mom on Netflix's hit show Dead To Me, a role that extends off-screen as well. While she's a mom of two as her character Jen Harding on the Emmy-nominated show, Christina Applegate has one child in real life.

The 2020 Emmy nominee is a mom to a 9-year-old daughter, Sadie Grace LeNoble, with husband Martyn LeNoble, whom they welcomed into the world on Jan. 27, 2011, according to Reuters. "She's healed me in so many ways," Applegate told People at the time. "She's just made my life so much better. She's opened my whole soul."

In the years her daughter's birth, Applegate has kept her daughter out of the public eye, though she did share a photo of Sadie to her Instagram account for the first time in April. The actress told Ellen DeGeneres in May that she took some years away from Hollywood to raise Sadie, who is now in the third grade and 9 years old.

Applegate and LeNoble, a musician, have been married since 2013, after getting engaged in 2008, according to People. Although the actress once hinted that she would love to give Sadie a sibling, she told Access Hollywood in 2013 that she and LeNoble are "a little old" to have enough energy required to have another kid. "I'm 41 years old and I don't know if I could do the whole like, not sleeping thing again," she told Access Hollywood.

It sounds like Sadie keeps her mom plenty busy. The actress told DeGeneres earlier this year that she volunteers in the library at her daughter's school when she isn't acting, and enjoys reading books to the kids.

Her full-time role as a mom isn't a far cry from the role that she plays on Dead To Me. Applegate told Variety that she is happy to play an imperfect mom in the Netflix series, which is a change from the Type A mom that people are used to seeing on TV. "They do exist, but most of us aren't like that," she told the publication. "Most of us are suffering. Most of us are struggling to be — not the best we can be but just be enough."