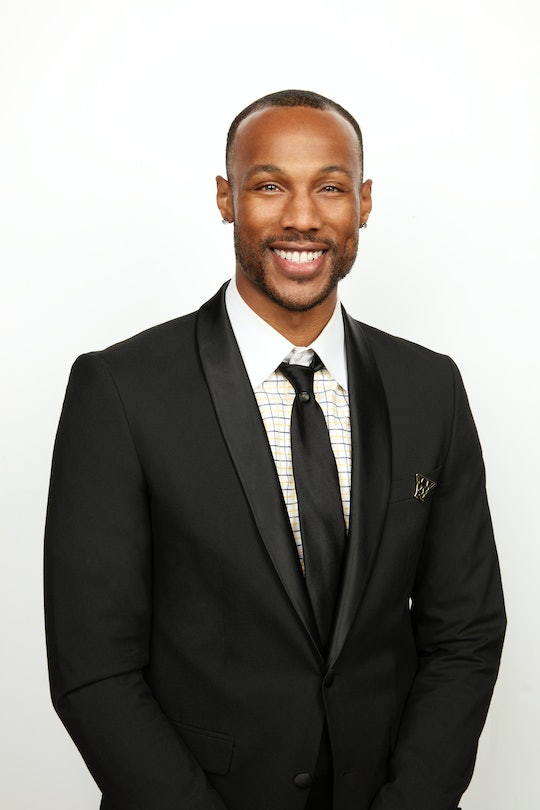 Christon From 'The Bachelorette' Has An Unconventional Basketball Career

Becca Kufrin's season of The Bachelorette started like any other: with a fancy cocktail party in which she frantically tried to get a sense of 28 men vying for her affection. Thankfully, the newly instated two-drink-per-hour maximum ensured that she didn't have to deal with a bunch of drunk dudes on night one à la JoJo Fletcher. Instead, she enjoyed classic cast conflicts about who was there for the "right reasons" and some wholesome fun in the form of Christon Staples, who trotted out (see what I did there?) his basketball skills. So does Christon still play basketball? The former Harlem Globetrotter still enjoys a career as a "professional dunker."

According to his ABC bio, Christon decided to email the Harlem Globetrotters asking if they were looking for talent after growing bored in his corporate position in Detroit. They agreed to give him a shot (I can't stop making sports puns, just accept it), and he was soon traveling with the Globetrotters, putting on shows, and, apparently, learning how to woo women by literally dunking on them. On his first night in the house, Christon had the trusty Bachelor interns set up a basketball hoop in the front driveway of the mansion and asked Becca to stand in front of it holding a basketball above her head. He then took a running start, snatched the ball from Becca's hands, and sank a 360 dunk. Honestly, we haven't seen basketball skills like this on the show since Becca Tilley's effortless barefoot free throws.

The other guys stripped their suit jackets, rolled up their sleeves, and tried to join in, but Christon's skills were clearly unmatched. And there's good reason for that: even though he left the Harlem Globetrotters in 2016 to pursue a starring role in a feature film called Slamma Jamma, Christon continues to showcase his acrobatic and theatrical dunking. Staples told the Oakland Press while promoting the film:

"[The Globetrotters] weren’t going to let me leave the tour for something that wasn’t a big-budget film even though it was with a well-known director. So I had to make a tough decision because I couldn’t do both. I had to take a step back and think about my career at that point. I had great success with the Globetrotters and was making moves as far as branding myself and getting my name out there. I decided to take a chance and resign from the Globetrotters and try acting and make this movie."

The film followed a former basketball player as he prepared for a national dunking competition after serving time in prison for a crime he didn't commit. Christon had previously booked a national McDonald's commercial and another ABC commercial, but this film was his first big acting role. Since then, he's continued to play basketball around Venice Beach and dunk competitively, according to his Instagram. And even though Christon has never played in the NBA (or even college ball, for that matter), he still thinks of himself as having a career in basketball.

"People say, 'Why aren't you in the NBA?' Well, playing in the NBA, that's one job in basketball. And I have another job in basketball," Christon told Sports Illustrated in 2013. "They're both great. I'm doing what I love and I make people happy. And, I mean, it's not like I'm struggling. The way I look at it: I'm a normal guy. It's just that I'm blessed with being able to fly. For a little bit, anyway."

Even though he has aspirations of breaking into entertainment in a bigger way, Christon definitely seems like a good guy who injected some Becca-focused fun into the season premiere. Hopefully, his stint on the show continues to be respectful of her time.