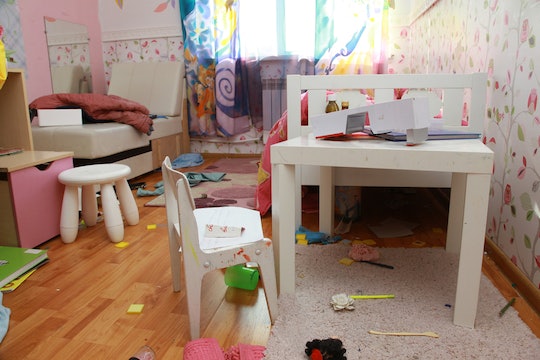 Your Clutter Isn't Sparking Joy For Your Kids Either, According To Psychologists

Thanks to the Netflix smash hit Tidying Up With Marie Kondo, it feels like everyone in the United States is looking at their stuff with a renewed sense of "How did I accumulate all of this stuff?" For parents, the problem is tenfold — kids come with a ton of junk. If it's not onesies and swaddles, it's toys and books and the explosion of childhood ephemera that can quickly take over a space. (Hello, Baby Shark everything!) But does clutter affect children? Beyond your kids leaving a mess, what about the clutter that just accumulates in your own home? It's easy for an adult to get frustrated when there is so much stuff everywhere, so you have to wonder how much of that impacts your kids, too.

A 2016 study in the Journal of Environmental Psychology asserted that cluttered environments can have a detrimental effect on a person's subjective wellbeing. The scientists argued that being in an overly-cluttered space can cause the mind to mirror its own self-worth to match the space. Simply put — a cluttered space means a cluttered mind, and a cluttered mind is not able to function as cleanly or directly as it would if it was unencumbered by that specific environmental trigger. A study in Environment and Behavior found similar results when studying messy, cluttered classroom environments. That study asserted that the environment in which the children learn can have a dramatic effect on their ability to concentrate and complete their work in the best way that they are able. Specifically, how busy the room is, if there is open space, and if there are soothing elements in the room.

Basically, when your kid's playroom is a total disaster with toys spilling out everywhere, it makes sense why they avoid it and aren't overjoyed to play in that kind of environment.

I contacted professional organizer Lisa Krohn of New York City, and she tells Romper that there's an important distinction that must be made when assessing the space of a child. Is it simply messy, or is it cluttered? According to Krohn, messiness can be defined as "not putting your clothes in the hamper when they are dirty, not putting them away at night if they are still clean," and that this isn't anything to really panic about. It's just the natural disarray that happens through the course of all of our lives. How many have "that chair," the one where you throw your jeans or work clothes after you take them off? Occasional messiness, however irritating it may be to some of us, is not the problem, says Kohn.

It's important to differentiate the everyday, expected mess from true clutter. Krohn says that true clutter, in her experience, can signal a larger problem. But does clutter affect kids, or are they granted some sort of immunity to the problem given their natural tendency to cling to things? She says that a cluttered space can have a real impact on a child's wellbeing. "Clutter causes confusion, accidents, paralyzes children from making decisions, and creates anger and temper tantrums. Clutter is too hard to process. They can’t see the forest through the trees."

Psychologist Dr. Ryan Sinclair, PhD wrote on Dayton Children's Hospital health blog that it's more than a feeling — it's psychological science. "A direct relationship has been established between clutter and tension. For some individuals, a more cluttered household may increase our stress levels." Thankfully there is hope for even the most clutter-prone family. Sinclair suggested starting a routine to declutter a space, one that's age-appropriate for the child. Allow them to do what they can and let them learn to feel that sense of reward that comes with completing a task that has such a positive effect on themselves and others.

Sinclair also wrote that it's really important to use visual cues for your kids — like labeled boxes and drawers for their things — to make the daily process more streamlined. When your kids are completing the tasks, make sure to praise them for it. It's not going to be an overnight process, and there will be times when you likely need to chuck some stuff in the middle of the night so they don't see you do it, but everyone will benefit from a clean, uncluttered environment. I know that I do.

More Like This
10 Easy Vegetables To Grow At Home
May The 4th Party Ideas For Star Wars Day
From Captions To Gifts, These Are All The Kindergarten Graduation Ideas You Need
34 Instagram Captions Perfect For Preschool Graduation Photos