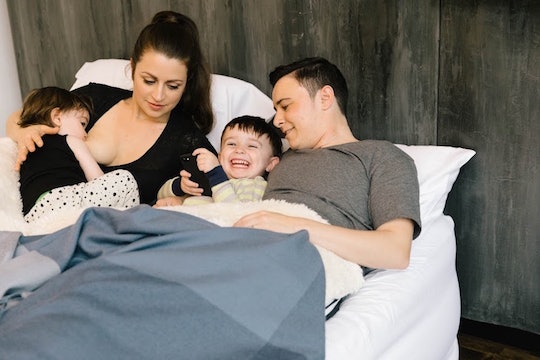 While many new parents love the idea of co-sleeping, or sharing a bed or bedroom with a new baby or young child, others worry about potential repercussions. A giant family sleepover could simply bring comfort and closeness... or it could result in a clingy, dependent child. After all, what are you teaching a child by being next to them constantly, meeting their every demand? Does co-sleeping make your baby clingy? Don't worry, you're not the first mom to ponder this — and I'm finding out the answer.

According to a piece written for Huffington Post by Rickey Bower, a former fire fighter and EMT, co-sleeping (or bed-sharing) is not some new trend or fad among hippie moms. In fact, co-sleeping was and continues to be the norm across the globe. "The reality is that providing a separate sleep space for an infant is a new (and primarily Western) development in human history. Even today, co-sleeping is practiced globally on a larger scale than separate sleep spaces," Bower wrote. According to Psychology Today, there are a variety of reasons why parents choose to co-sleep, like convenience (especially when mom is breastfeeding), bonding, cultural norms, and living circumstances (not everyone has space for a nursery).

However, the American Academy of Pediatrics does advise against co-sleeping in the same bed within the first year of life. According to their official website, "Infants should sleep in the same bedroom as their parents — but on a separate surface, such as a crib or bassinet, and never on a couch, armchair or soft surface — to decrease the risks of sleep-related deaths." According to their research, sharing your bed with an infant can increase their risk of SIDS, but sharing the same room can be beneficial for both parties.

But back to the initial question: is co-sleeping counterproductive for raising an independent child? It's one of the many parental concerns that makes sense in theory. How can a child learn to self-soothe if they're constantly with their parents? Won't they expect to always be fed and comforted instantaneously if they get that at night?

A 2011 study done at the State University of New York, Stony Brook says no — co-sleeping will not harm your baby developmentally or turn them into clingy monster. The study co-author, Lauren Hale, spoke to HealthDay News about the findings. "The American Academy of Pediatrics currently advises against bed-sharing during the first year of life, due to increased risk of SIDS," Hale told HealthDay. "However, very little research has investigated the potential developmental consequences of bed-sharing during toddlerhood. We found that, after adjusting for mother and child characteristics, there were no observed cognitive or behavioral differences between children who bed-share and those who don't."

In other words, there is no reason to believe that co-sleeping has any negative impact on a child's sense of independence. Quite contrary, co-sleeping has a whole host of benefits if done correctly. Specifically, babies under 1 should be in your room but on their own surface, while babies over 1 can share the actual bed. So, what are the benefits of co-sleeping?

According to parenting website Ask Dr. Sears, your baby may sleep more peacefully, have more stable vital signs, and even grow up with higher self-esteem and less anxiety, even becoming independent sooner if you engage in co-sleeping. Diana Divecha, author of the website Developmental Science, wrote in her blog that independence is actually cultivated, not impeded, by co-sleeping. "Though many Americans want their children to learn to be independent as early as possible, forcing a baby to manage herself alone is not the way to foster independence. Rather, independence arises naturally out of a secure relationship that builds up after many episodes of having her needs adequately met."

There you have it! If you're loving every minute of co-sleeping (or if you've been forcing yourself to sleep separately), you can relax. Despite the myths and false information, co-sleeping will not make your baby clingy. Enjoy it while you can.