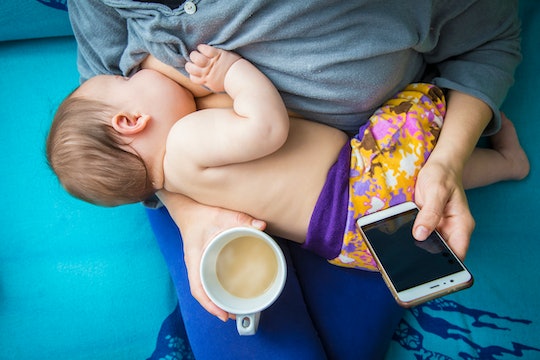 When you have a new baby, the one thing in your life that you lack the most is sleep. If you're breastfeeding, something you may also lack is supply. After your third cup of joe, you might be wondering, does coffee lower your milk supply? And you cross your fingers and toes hoping that it's something else that's causing your supply to diminish.

Thankfully, you don't have to worry so much about coffee affecting your supply. I contacted Molly Petersen, Certified Lactation Counselor (CLC) at Lansinoh, and she tells Romper, "There isn’t a direct relationship between coffee and milk supply." And all of the angels sang, the puppies rolled over and showed their fuzzy bellies, and you magically have enough points on your Starbucks card for two pumpkin cream cold brews.

But there's a catch. Peterson says just because there is no link to supply that it "doesn’t mean that breastfeeding moms are OK to drink large amounts of it." Record scratch. What?

"The caffeine from coffee will be absorbed into your breast milk," Peterson adds. Which, for me, could mean that my babies were probably exposed to a prodigious amount of caffeine in their young little lives. This explains so much about my son and his complete and total adoration for iced coffee and iced tea. Sorry, kiddo. I'll just go refill your Dunkin' card now, out of guilt. My bad.

You see, coffee and I are besties. Joe gets me up in the morning, powers my day, and on most nights, he's also dessert. I speak about coffee like he's some rich and elusive lover and we're having a torrid affair. (Obviously it's very hot. Unless it's iced.) When I was breastfeeding, it was worse. Much, much worse. And my son? The one who now, at age 11, has the Dunkin app on his phone? That kid did not sleep for the first year. I was breastfeeding that child even more than I was sipping my coffee, and it turns out, those two things might have had a reciprocal effect on one another.

Peterson cautions that "some babies are more sensitive to caffeine and it can cause fussiness and refusal to nurse. This decrease in breastfeeding can then lead to a decreased supply." While my child did not stop nursing when he was fussy, he was a fussy baby all night long. Which led to me nursing him more. (I was probably lactating pure java at that point.) I never considered that my all-night nursing sessions, which led to all day peeing and pooping from my little one, could be due to my coffee intake. I blame my exhausted, addled mind. Having a baby is hard, having one without the crutch of my beautiful coffee lover would have been crushing. But maybe my kid would have slept better, and maybe I would have been able to ease off the dark magic of the bitter brew.

"The estimate we often hear is 'less than five 5-ounce cups of coffee' or 500 milligrams per day," The website KellyMom noted. "Various sources suggest an upper limit for caffeine intake ranging from 300 to 750 milligrams per day." I was having more than that. In the interest of full disclosure, I will say that I had a 10-ounce serving of French Press Dunkin in the morning, sometimes two cups, a large decaf or regular iced coffee in the afternoon, and maybe another cup at night as I studied for graduate school exams. That is about 1000 milligrams per day on average. Too much by any estimation, and now, my difficulties with putting my son to bed are pretty glaring.

Thankfully, he can buy his own coffee now, instead of me constantly having to supply him. Freeloader.