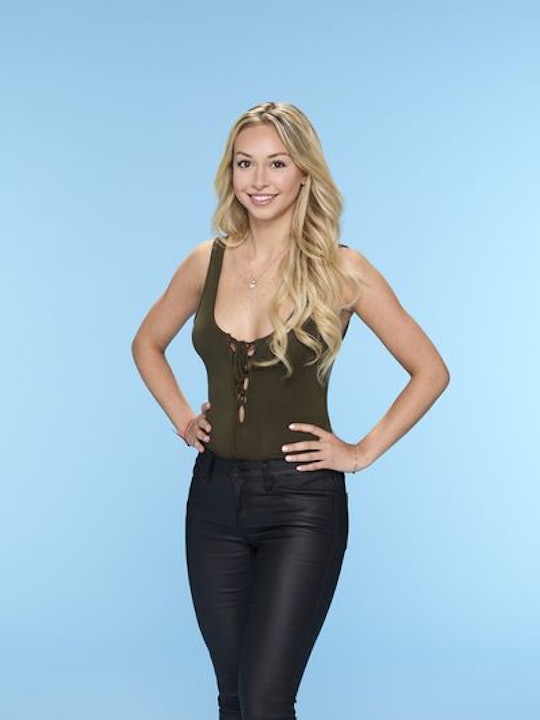 'The Bachelor's Corinne Isn't An Only Child

Corinne Olympios has quickly become one of the most talked-about contestants in the 21 season-long history of The Bachelor. The 24-year-old Miami native has been unabashedly upfront with her affection for Nick and unapologetically aggressive in "borrowing him for a sec" from the other women at any given opportunity. Corinne's background also intrigued viewers, given that her intro sequence boasted that she runs her father's "multi-million dollar company" and revealed that she has her own cucumber snack-preparing nanny, Raquel. While we also glimpsed Corinne's father-boss and her mother briefly, many are wondering: does The Bachelor's Corinne have any siblings?

In her "glamorous life" introduction, Corinne explained that she lives with her family and works with them, essentially being around them 24/7. It's clear that the Olympioses are very close, given this information and given their very chill reaction to Corinne's on-air antics. TMZ reported that they were told that the entire family watched the premiere together and enjoyed it, having no problem at all with the way Corinne was portrayed. Clearly, Corinne and her parents are well aware of The Bachelor's well-known history of villain-editing, to have at least one clear "antagonist" per season.

But Corinne and her parents aren't just a family of three – or even four, if you count Raquel the nanny. Though she didn't appear at all in Corinne's hometown video, the blonde businesswoman does have one sibling. Taylor Olympios, Corinne's younger sister, appears alongside her older sib in many photos. Both Corinne and Taylor have shared dozens of photos with one another across both of their Instagram accounts.

The two women look strikingly similar – Taylor is basically Corinne's brunette doppelgänger. The brown-haired Olympios sibling is also significantly younger than her now reality TV-famous sister – they are nine years apart in age. Corinne's account stretches all the way back to 2012, and even features a few sweet pictures from her sister's Bat Mitzvah, complete with loving sisterly captions.

The Olympios family also celebrated Taylor's 16th birthday, shortly before Corinne left to film The Bachelor. Corinne uploaded a video of the family at a celebratory dinner, complete with her singing "Happy Birthday" to her little sister.

On top of being a close family, Corinne and her sister seem to legitimately be friends as well. The Olympios sisters rang in the new year together at Fontainebleau Miami Beach.

Taylor is clearly proud of her older sister, consistently posting supportive pics and comments on Corinne's own Bachelor uploads. And who knows? Depending on how the rest of this season goes, maybe Nick is about to inherit a 16-year-old sister-in-law in Taylor.