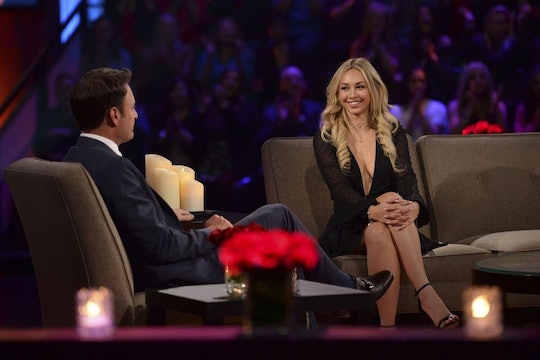 Corinne Is Moving On From Nick & 'The Bachelor'

Corinne Olympios was clear about her feelings for Nick Viall from the first minute of this season of The Bachelor. She never hid how into Nick she was, and her single-minded pursuit of him caused more than a few in-house upsets. After weeks of whipped cream and bouncy castles and late night visits, Corinne confessed that she loved Nick and then he promptly eliminated her, which seems to be Nick's modus operandi this year. Corinne was heartbroken in the moment, but how has she fared in the days and weeks since? Does Corinne still love Nick after The Bachelor?

Although Corinne didn't take the breakup well right after it happened, she's moved on now. In an interview with People following her exit from the show, Corinne explained how hurt she was from Nick's rejection, but revealed that she's ready to move on. "I was shocked. Clearly we had the best hometown date. It was super, super tough on me," Corinne stated. "I'm over it [now]. I'm really over it because that's just the kind of woman that I am. But it was shocking. My sister got me through it. Coming home to my sister and doing fun stuff just really got me through all of it."

All in all, it's perfectly Corinne: she processed, she probably took a nap, and she left all those bad feelings behind.

According to Corinne, getting back to reality after the whirlwind of the show was tough, but she pushed through by burying herself in her normal routine. Though she was initially blindsided by the elimination (particularly following what she thought was a great date) she was able to pick herself back up again fairly quickly. Corinne was recently spotted partying poolside at a friend's birthday party in her hometown of Miami, so it seems like she's doing OK.

And Corinne remains just as positive and confident as she ever was. "I love myself," she told People. "I think being unapologetic and being myself is the best way to be. I wouldn't change a thing about myself. There's always room for growth, though. It's only up from here." It's good to know Corinne's experiences on the show didn't change her one bit; next time she shows up on TV (if she does) then fans can count on her being the same old Corinne.

As to whether she'll appear on Bachelor in Paradise as so many fans are hoping, Corinne told Jimmy Kimmel that it might be too early to make that decision. But Bachelor in Paradise won't be half as fun without Corinne, so hopefully she will choose to party it up on the beach come Season 4. It seems like that would be just her style.