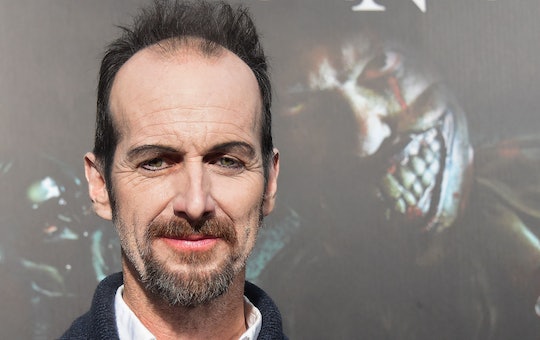 Does "Croatoan" Banish Evil On 'AHS: Roanoke'? It's A Powerful Word

The word "Croatoan" keeps coming up on Season 6 of American Horror Story, and there's a good reason for that: it was the only word left behind when the Roanoke colony vanished from their settlement. It's been invoked whenever a particularly threatening spirit is making their presence known, and it seems to effectively get rid of them. During "Chapter 4" Shelby and Matt are being menaced by Piggy Man when Dr. Elias Cunningham appears out of nowhere and disposes of the danger with a simple "Croatoan." But does "Croatoan" banish evil on AHS: Roanoke?

When asked what the word means by Shelby, Dr. Cunningham doesn't reference any particular protection qualities associated with it. He says Croatoan is a "word of dark power and blood magic," and brings up its association to Roanoke. In real life, Croatoan can refer either to an island near Roanoke Island or the tribe of Native Americans who inhabited it. However, within the world of AHS, it has a different history. Though it's getting worn out this year, the word has appeared on the show before – way back on Season 1, when Billie Dean Howard was telling Violet how to deal with the violent ghosts in her home.

Billie Dean did describe "Croatoan" as a banishment spell. In her story, when all of the Roanoke colonists died, their spirits began to torment the local Native American tribes. While there haven't been any Native American characters so far in Season 6, this does seem to describe what's happening to Shelby and Matt: the vengeful Roanoke ghosts are causing them an extreme amount of trouble. According to Billie Dean, back in the 1500s a Native American tribe leader then cast a "banishment curse" to get rid of all the ghosts.

"First he collected the personal belongings of all the dead colonists," Billie Dean said. "Then they burned them. The ghosts appeared, summoned by their talismans. But before the spirits could cause them any more harm, the elder completed the curse that would banish the ghosts forever. By uttering a single word. The same word found carved on a post at the abandoned colony. 'Croatoan.'"

This also makes sense in the context of Season 6; the word does indeed appear to banish ghosts. However, it doesn't always work. It didn't work in Season 1 when Violet tried to use it and it didn't work in Episode 4 when Shelby used it, either. It's possible the person casting it needs to possess some kind of supernatural abilities. Or perhaps it's a little like Wingardium Leviosa – you have to get the pronunciation just right.