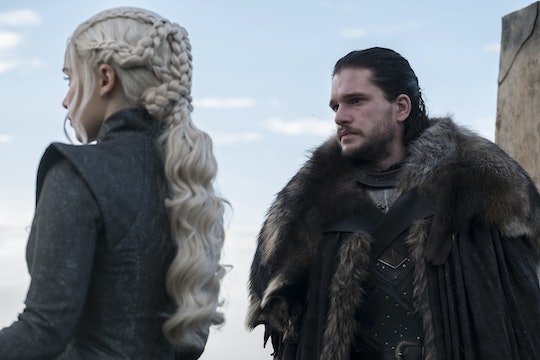 If you're anything like me, you've spent most of the past six seasons of Game of Thrones trying to decide if you're more Team Dany or Team Jon. So imagine my glee when it was revealed they're literally family and now hanging out together. But does Daenerys know she's related to Jon Snow on Game of Thrones? Considering the fact that she considers herself the last living Targaryen and her decidedly cold demeanor when they met, I'm gonna go with no. What's perhaps more interesting is how she'll react when the truth is eventually revealed.

For a little Westeros history primer, Jon Snow is actually the son of Rhaegar Targaryen (who was the crown prince during the Mad King's rule) and Lyanna Stark, the sister of Ned Stark, who Jon grew up believing was his father. Rhaegar Targaryen was Dany's brother, killed by Robert Baratheon during the rebellion. As it stands, the only person who knows this is Bran Stark, thanks to his Three-Eyed raven visions which allow him to see (and sometimes interact with) the past. So neither Dany nor Jon is in any way aware that Dany is Jon's aunt, and that Jon is as much a Targaryen as he is a Stark.

In their first meeting, it's clear that neither character has any understanding of what the other has gone through, or that they have several reasons to get along. In an interview with Entertainment Weekly, Kit Harington who plays Jon Snow said "As far as Jon knows, he’s just meeting this queen he’s heard of and trying to negotiate with her — he’s not meeting Daenerys, who the audience has been watching for so many years." He also adds that Jon might be feeling a twinge of attraction: "He walks into the room and doesn’t expect to see such a beautiful young woman of similar age to him. Any young man’s reaction is going to be, ‘Okay…’ but he puts that aside, because he has to." According to Emilia Clarke, who plays Daenerys, she is not any more impressed. "...she doesn’t like him and she doesn’t believe him," she stated, in regards to Jon's claim that White Walkers are real.

In a post-episode recap with showrunners David Benioff and D.B. Weiss on HBO Go, the characters are ambivalent at best about each other. Basically, Jon sees a pretty girl with a fancy name and a big chair proclaiming herself "queen of the world" while Dany just sees an unwashed bastard barbarian from the North talking nonsense. What's it going to take for the two of them to finally get on the same page as we all need them to be? Perhaps learning about each other's backgrounds or about their shared lineage will be a start.