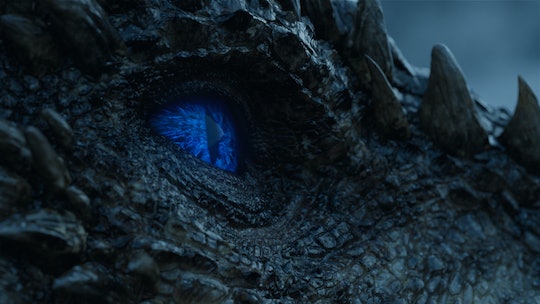 In "Beyond the Wall," one of Daenerys' dragons was surprisingly killed by the Night King and then turned into an ice dragon shortly thereafter. Now the Night King has his own dragon to join his ranks, but does Daenerys know Viserion is an ice dragon on Game of Thrones? My guess is, probably not.

After Viserion was killed, Daenerys, along with the men that went beyond the Wall with Jon, quickly hightailed it back to safety, before the Night King could kill another dragon. Though Jon was left behind, thanks to his Uncle Benjen he was able to ride a horse back to everyone else. It wasn't until all the living had dispersed that the Night King then had his wights drag Viserion's body out of the water using some chains he just happened to have lying around. (Is there a Home Depot beyond the Wall I didn't know about?)

The Night King then touched Viserion, whose eye then opened, revealing it was a bright blue color, indicating he's now an ice dragon, or wight dragon, depending on who you ask. Since Daenerys and everyone else on her side was already gone by the time Viserion was turned into whatever he is now, how could Dany possible know what has become of one of her children? She probably just believes Viserion is dead, which is painful enough. Though this fate is arguably much worse.

So Dany will, unfortunately, be very surprised whenever she sees Viserion again. While it's unclear right now how the Night King plans to use Viserion to his advantage, it's almost inevitable that Viserion will have to face off against his brothers. Watching Viserion die the first time was difficult enough; it'll be terrible for Dany to have to pit her two other dragons against him, but it'll have to be done.

Still, this will be a difficult thing for Dany to accept. While Viserion has obviously been changed and is no longer the dragon she loved, he'll still look like the same Viserion she's always known. It wouldn't be surprising if Daenerys resists killing Viserion, and instead tries to think of a way to save him or have him turn back into the dragon he used to be. However, at least as far as fans known, there's no way to bring back someone, or something, that's died and become a wight.

Then again, if Jon could be resurrected, who knows what could happen? Either way, facing Viserion again will be a shock for Dany and that shock may cause her to make a misstep that could cost people, and her dragons, their lives.