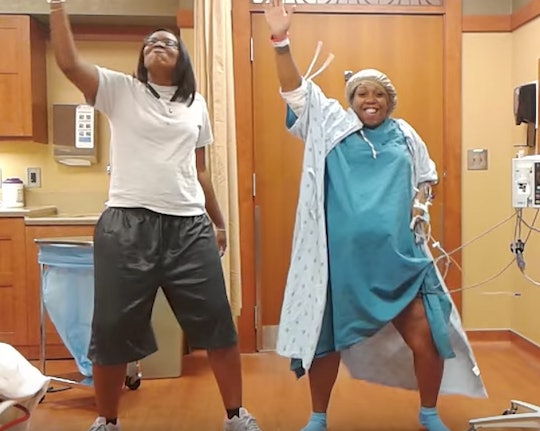 Actually, You Shouldn't Dance To Induce Labor Before Knowing This First

As someone who has experienced pregnancy more than once, I can tell you the closer you are to your due date, the more miserable you become. So if you're past your due date and want to get things moving, shaking your groove thing in the hopes your baby will start moving in a southernly direction might not be the worst of ideas. But does dancing induce labor, or is this just an old wive's tale? More importantly, is a little two-step worth the extra energy you undoubtably do not have when you're in the third trimester and ready to get the damn show on the road? Thankfully, a few experts have an answer for every soon-to-pop pregnant woman out there.

Labor induction, as defined by the American Congress Of Obstetrics (ACOG) and Gynecologists, is the use of medications or other methods to bring on (or induce) labor. The reason for inducing labor is to stimulate uterine contractions in order to have a vaginal birth. The website for ACOG explains further, saying that sometimes doctors recommend labor induction if the mother's or fetus' health is at risk, or if there are other non-medical reasons that deem induction necessary. When this occurs, it is called an elective induction.

Dancing, of course, is on the complete opposite side of the spectrum from the kind of medical induction described above (which is most often performed in a hospital). It falls more under the category of "at home" or "natural" induction methods that people might recommend, along the lines of eating spicy Chinese food or vacuuming. Physical activity in general has long been high on the list of natural ways that women try to induce their labor.

According to a 2014 study published in the Journal of Perinatal Education, the most commonly reported labor trigger in the study (of 663 women) was physical activity (usually walking). Other triggers included clinician-mediated triggers, physical triggers such as sexual activity, ingesting a substance or food, emotional triggers, or maternal illness. Most women reported simultaneous triggers having been the cause, with the exception of walking and sexual activity (which were each reported as single triggers). It must be noted, of course, that this was not a statistically large study pool and it's a self-reported study. Still, it gives some insight into how physical activity in general seems to hold great power over our perception of what, outside of medical intervention, induces labor.

But what about dancing, specifically? Have their been any medical studies about this particular physical activity shining above the rest of the at-home methods of induction? Sadly, there doesn't seem to be any reliable sources on the topic. There is, however, this great viral video of one pregnant woman in Florida dancing to a Justin Timberlake song before going into labor, so it might not be outside the realm of possibility.

As the website What To Expect points out, it is important that you get the OK from your practitioner before any excessive physical activity in your third trimester or trying any at-home labor inducing methods. You wouldn't want your baby to make an appearance before they were healthy and ready enough to do so. (Oh, and, as your relatives say, you also wouldn't want to leak all over that dance floor.)

More Like This
Everything You Need To Know About Postpartum Blood Clots
All Your Questions About Getting Pregnant After A Tummy Tuck Answered
Breaking Down The Different Types Of Postpartum Infections
Can The Way You Sleep Really Turn A Breech Baby?