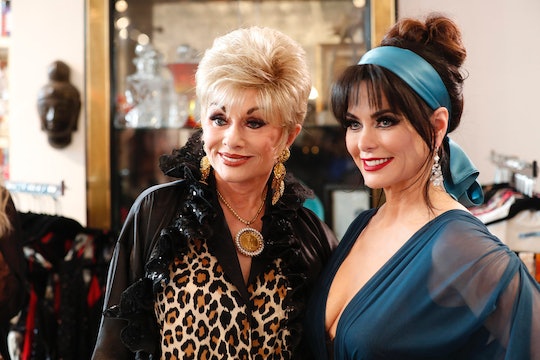 D'Andra Simmons Is Taking Over More Than Just Dallas On 'RHOD'

Fans of The Real Housewives of Dallas have seen the constant push and pull between D’Andra Simmons and her mother, Dee. D’Andra has been working under Dee for years, and has been patiently waiting to take the reign when her mom retires. She recently branched out with her own skin care company called Hard Night Good Morning, but does D'Andra Simmons now own her mom's company too?

As reluctant as Dee has been, it seems she finally handed her company over to D’Andra. According to a report by The Dallas Observer, D’Andra took charge of Dee’s company, Ultimate Living, over the summer. When speaking to the outlet, Dee explained that it was “easy” and a “relief” for her to hand over the company, but she still visits the office about once a month to check on things.

According to the Ultimate Living website, Dee started the company in the 1990’s, after battling breast cancer herself and going through an eight hour modified radical mastectomy. She traveled the world in hopes to find alternative therapies and medicines that could help her live a healthy lifestyle. She met with doctors and naturopaths from other countries, and found a way to change her diet and lifestyle to improve her health and keep her cancer at bay.

Dee then turned her findings into a nutritional supplement line and marketed it through home shopping outlets. D’Andra, who had been working at the Department of Energy in Washington, D.C., left her job and began working with her mom in 2004. She helped her mom expand the company into skin care, and both have been running the company ever since.

But now, at the age of 77, Dee has decided to turn her attention away from her business and focus on helping sick people. In her interview with The Dallas Observer, Dee revealed that she is an advocate for nearly 400 patients, and she helps them find the right medical care for their needs. She noted that her own experience with breast cancer, along with the knowledge from running a nutritional supplement company, has given her some insight on how to understand patient experiences. Dee said that she uses her wealth and position to pair patients with the best hospitals and doctors in the world, and she doesn’t take a dime for it.

“It’s my heart’s desire, I love to help people, I love people,” Dee told the outlet. “To put it in a nutshell, I have a vision, a mission and a passion to help those with health-related issues. I’m just as good at this as I was with the clothing lines, as I have been with my nutrition company and now in this role.”

Now that D’Andra is running Ultimate Living, she has merged both her skin care line and her mom’s nutritional supplement line together under one umbrella. As the celebrity CEO of both companies, D’Andra continues to promote both lines through TV and social media. Just recently, she was featured on Windy City Live, where she promoted a few of Ultimate Living’s health and pain supplements.

Fans will get to see more of D’Andra and Dee on Part 2 of The Real Housewives of Dallas Reunion special, which airs Wednesday, Dec. 12 at 10 p.m. ET on Bravo.