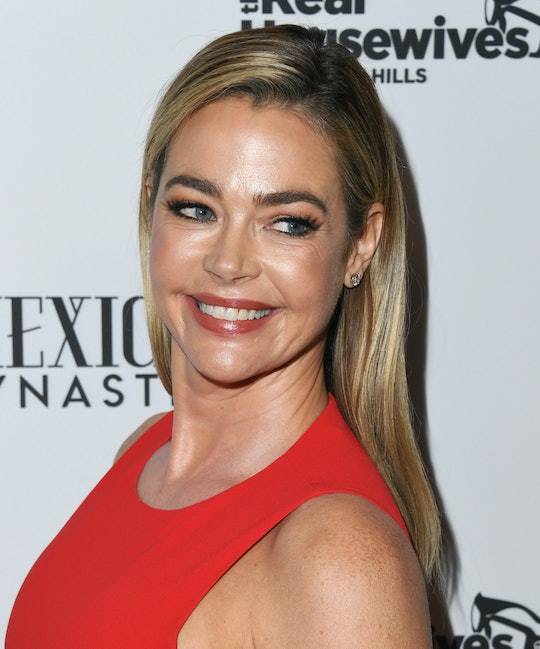 This is Denise Richards' first season on The Real Housewives of Beverly Hills, and it looks like the actress is having trouble getting settled. She had to relocate twice in the span of three months due to various natural disasters, so fans may be wondering whether Denise Richards still lives in Malibu. According to Bravo's The Daily Dish, she does as of last February.

Back in August of 2018, she finally managed to sell her $4.75 million Hidden Hills, CA home, which she'd been listing on and off for 10 years. Then, in November, after her spot on Season 9 on RHOBH had been announced, Variety reported that she and her newly minted husband Aaron Phypers were moving into a $17,500-a-month beachfront rental property in Malibu — their second Malibu home after being evacuated due to the Woolsey Fire. The wildfire ignited on Nov. 8 and was finally contained on Nov. 16, killing dozens and destroying many homes. Denise and Aaron posted a video to Instagram on Day 6, explaining that they still were unable to get past the police-monitored checkpoints and back into their house. They also revealed that they'd been camped out in a hotel waiting for the fire to pass.

Unfortunately, the natural disasters kept coming. In February of this year, Denise was forced to leave her $17,500-a-month Malibu rental due to flooding. "Why can’t the paparazzi ever take pictures of me when I have make up on and my hairdo done?!? And dressed 'nice' instead of me being disheveled packing our house up to move after it’s been flooded," she wrote in a February Instagram post after being photographed running errands. "I really do #rhobh a disservice looking like sh*t."

The rental property was an over 3000-square foot charmer with three bedrooms and three baths, plus a separate, studio-style bedroom and bath in a detached guest house. It boasted a combined living room and dining room with a fireplace, a master suite, and an oceanfront terrace with a raised sunbathing deck. Needless to say, the views were stunning from just about every angle.

The Woolsey Fire also ripped through castmate Camille Grammer's $3.2 million house, forcing her to move into an investment property she kept in Malibu. The fires raged less than three weeks after her wedding in Hawaii, where she married attorney David C. Meyer. “I went from one of the best days of my life, to such a tragedy,” Grammer told People in November. "It’s so sad. It’s such a tragedy."

Grammer added that she was about to pack for the RHOBH trip to the French chateau when her family got the order to evacuate. She recalled being in touch with Denise and former housewife Eileen Davidson, who also lived in the area, to check in on the states of their homes, too.

You can learn more about how the Housewives coped with the devastating wildfires in the Jun. 18 episode of RHOBH.