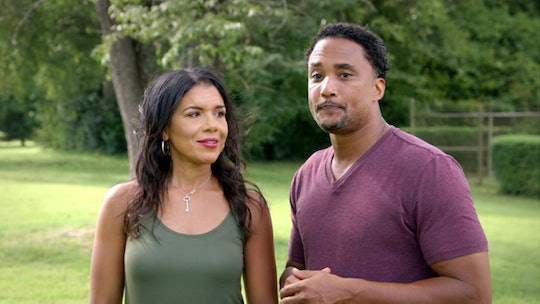 HGTV's Flip or Flop Nashville has a unique hook: its house-flipping team DeRon Jenkins and Page Turner aren't just home makeover enthusiasts, they're also exes. That adds a little something extra to their bickering every episode, though they are on good enough terms to continue working together. But since he's no longer romantically involved with Page, does DeRon Jenkins have a girlfriend?

If DeRon is in a relationship, then he's keeping it private for the moment. But judging by social media, he seems to be single. His Instagram account features Page quite often, but that's because they do a lot of promo for the show together. And while DeRon is a fan of selfies and remodeling photos, there aren't any other women popping up on his Instagram who might be someone he's in a relationship with. Though he did take to social media to show off his new air fryer, so I assume he's down to cook some delicious meals if he does find that special someone.

DeRon and Page sat down for an interview with Us Weekly in January 2018, which seems to be the last public comment he made on his relationship status. At that point he was still single (as was Page), and it doesn't seem like much has changed since then.

And it doesn't seem like his relationship with Page will turn romantic again any time soon, either. She told Us Weekly that they were in a great place and worked very well together, but weren't necessarily interested in being a couple. They dated "for a long time" before the show, though they had a very amicable split. Page said there was no blowup or huge fight; they merely chose not to be a couple, spent some time apart, and then decided to work together. And that situation turned out very well for them.

"The secret is respect and trust," DeRon told the publication. "We respect each other. We feel like we both are at the top of our craft. We work well together as far as trusting. I know what she's gonna do, she knows what I'm gonna do. Our expectations of each other are very realistic. We make it work."

Their respect for one another was obvious in another joint interview DeRon and Page did for HGTV. They each praised the other's skills when it came to finding and fixing up houses. There were sometimes bumps in the road, like Page buying a house without informing DeRon first, but they always managed to help each other through it in the end.

DeRon has one daughter from a previous relationship whom he recently sent off to college, but it's unclear whether he was married to his daughter's mother or not. DeRon has found success by combining his personal life with his professional endeavors, and that seems to be keeping him busy for now. If DeRon is no longer single, then he hasn't made any announcements about it publicly. But without any clues to the contrary, fans have to assume that DeRon isn't dating anyone.