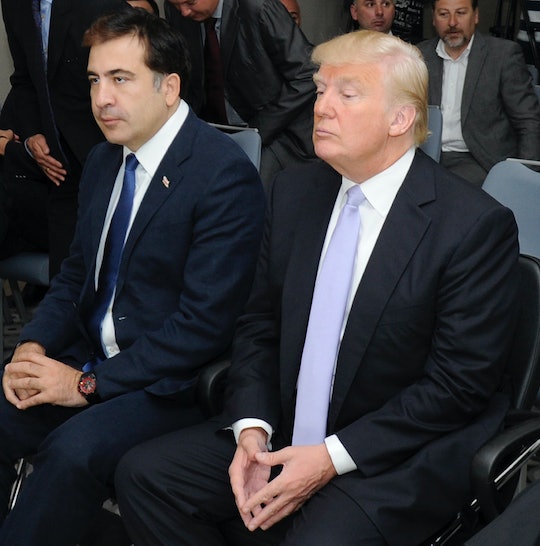 Throughout the election cycle, Republican nominee Donald Trump has danced around questions about Russia, like how close he is with Putin or what kind of investments he has in the country. Although he's denied it in the past, it looks like Donald Trump may allegedly have business investments in Russia after all. Paperwork allegedly furnished by the Russian government and posted by Keep America Great, a Democratic coalition founded by Scott Dworkin, shows that Trump reportedly has at least 29 companies in Russia, which goes against what the candidate has said in the past.

The information in the documents still has to be confirmed and vetted, but it raises some questions about Trump's interest in Russia. When asked point blank, Trump always says that he has no investments in Russia, but the new docs might prove otherwise. Trump does have some vague connections to Russia — if not business based— whether he likes it or not, but any potential investments are hard to investigate, since the candidate has refused to produce any tax forms or financial data to the media.

According to The Washington Post, many of Trump's businesses have at least received investment money from Russian businesspeople. As far back as 2008, Donald Jr. said at a real estate conference, "Russians make up a pretty disproportionate cross-section of a lot of our assets." He added, "we see a lot of money pouring in from Russia.”

Trump has also visited Russia and appeared on their national TV networks to praise Putin and his leadership. He also said that he thinks it is "unlikely" that Russian hackers are interfering with the current election, even though most evidence points to Russian hackers handing information over to Wikileaks — first during the Democratic National Convention and again this fall, leaking emails from Hillary Clinton's campaign chairman, John Podesta.

However, in a press statement on Monday, Democratic Coalition Against Trump spokeswoman Francesca Lucia claimed that the organization had "uncovered 249 companies registered in Russia with the Trump name in them," at least a handful of which appeared to still be active. Several of the 249 companies listed had addresses in Moscow and St. Petersburg.

"These latest findings raise serious questions about whether Trump has a conflict of interest that could put our national security in real jeopardy. The election is three weeks away," Scott Dworkin, Senior Advisor to the Coalition, said in a statement. "We can’t wait any longer."

According to sources close to the document drop, the alleged connections aren't the only ones Trump may need to worry about, as the mogul allegedly has ties in other countries of note as well. Romper has reached out to Trump's camp for comment and confirmation on the alleged revelations and is awaiting a response.

In fairness, the newly unearthed documents could simply prove to be forged or dead-ends in the long run, and as some have pointed out, they could very well be unconnected to Trump himself at all. But they do raise some crucial questions and have prompted media members everywhere to do further digging.

Trump may do some good if he were more transparent about any possible financial ties to Russia so that it wasn't speculation. Until then, voters can only take him at his word or take today's leaked financial documents and connect the dots.