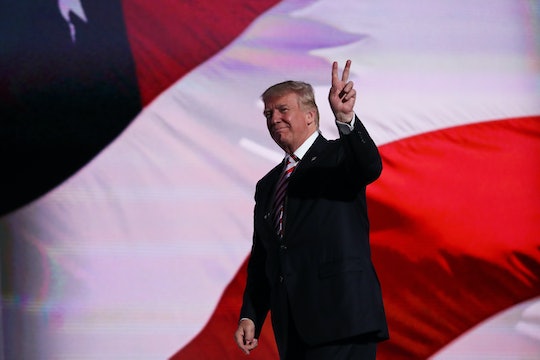 As the Republican presidential nominee, Donald Trump has been endorsed publicly by powerful gun lobby the National Rifle Association, and has been adamant about being a strong supporter of unrestricted Second Amendment rights, particularly as they relate to protection and self-defense. But does Donald Trump hunt, too? Trump's sons Donald Trump Jr. and Eric Trump were widely criticized when photos from a big game hunting trip in Zimbabwe surfaced online in 2012, and then again 2015, according to The Daily Mail. In the photos, the two men can be seen posing with a variety of dead animals, including a leopard, an elephant, a buffalo, and a waterbuck. According to South African hunting tour company, Hunting Legends (which its website describes as "[specializing] in big game hunts for the wealthy"), the Trump brothers' hunt was fully licensed and legal. But that, of course, didn't help the fact that seeing photos of the men proudly holding up dead endangered animals (and, in Donald Trump Jr.'s case, a elephant tail he had just sliced off), seemed entirely inhumane, and honestly, pretty stomach-churning.

When asked about the photos in 2015 during a press conference at his golf resort, Trump Turnberry, in Ayrshire, Scotland, the elder Trump admitted that he himself didn't like to hunt, but that his sons were "great marksman, great shots, they love it."

According to The Telegraph, Trump told the Scottish crowd,

My sons love to hunt. They are members of the NRA, very proudly. I am a big believer in the second amendment. My sons are hunters. Eric is a hunter. He puts it on a par with golf — ahead of golf. And my other son is a hunter.

As for his take on whether it's ethical to hunt endangered animals for fun like his sons did, even if it was legal? Trump steered clear of answering, saying, "I'm not necessarily in favor of that. I know nothing about that. That's up to other people."

But Donald Trump wasn't the only one willing to defend the hunting trip following public criticism. According to The Daily Mail, Donald Trump Jr. spoke out on Twitter following the photos' release, saying he wasn't ashamed of his actions. In a since-deleted tweet, Trump Jr. wrote, "Not a PR move I didn't give the pics but I have no shame about them either. I HUNT & EAT game". In a separate tweet, he explained, "I AM A HUNTER I don't hide from that."

In further tweets, Trump Jr. even argued that the trip was altruistic and benefitted the local residents:

He then shot back against the so-called "PETA crazies":

The Trumps weren't the only ones advocating that they'd done nothing wrong on their hunting trip though. In a 2012 Forbes op-ed, author and field editor of the NRA's American Hunter magazine Frank Miniter wrote that he interviewed Trump Jr. following the release of the photos, and that he and his brother had been unfairly portrayed by the media, and that the men's motives were misunderstood. According to Miniter, Trump Jr. said,

Anyone who thinks hunters are just ‘bloodthirsty morons’ hasn’t looked into hunting. If you wait through long, cold hours in the November woods with a bow in your hands hoping a buck will show or if you spend days walking in the African bush trailing Cape buffalo while listening to lions roar, you’re sure to learn hunting isn’t about killing. Nature actually humbles you. Hunting forces a person to endure, to master themselves, even to truly get to know the wild environment. Actually, along the way, hunting and fishing makes you fall in love with the natural world. This is why hunters so often give back by contributing to conservation.

Trophy hunting's boon to conversation is one argument often raised in favor of legal hunting trips like the Trumps', but the benefits of these expensive hunting expeditions don't always play out as they are supposed to, according to National Geographic:

Legal trophy hunting is supposed to raise money for conservation efforts, according to international treaties. But critics say corruption often siphons off the funds. And skins, bones, and other materials resulting from a hunt can find their way into the black market, where they fuel demand in Asia for traditional cures or status symbols.

But regardless of where you stand on the merits of trophy hunting, Donald Trump himself seems to sit firmly in the middle. According to Miniter, Trump Jr. said that his father “really doesn’t understand why Eric and I hunt," but added that "he is open minded and so always allowed us to go hunting.”

More Like This
What You Need To Know Before Talking To Your Kids About Gun Violence
All The Fun Stuff For Kids & Families Coming To Netflix In June 2022
Take An Exclusive Look At A Brand New, Four-Part Peppa Pig Special
New Parents Google Around 6 Baby Questions A Day, New Survey Says