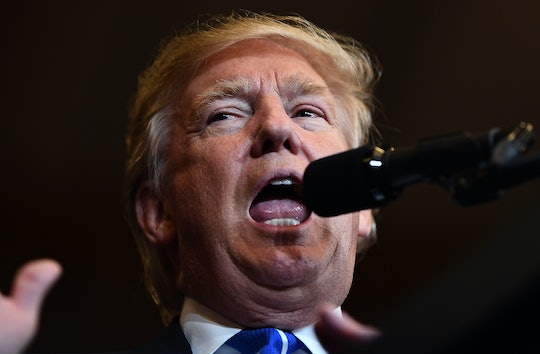 With just a little over a month until the presidential election, each candidate's positions are coming into sharper focus on everything from domestic to foreign policy. Republican presidential hopeful Donald Trump is sorely lacking in the the foreign relations experience column compared to Democratic candidate Hillary Clinton, who served as the U.S. Secretary of State. That doesn't mean that Trump doesn't have opinions and positions of his own when it comes to foreign policy, but sometimes they're a bit hard to parse out. With regard to the ongoing Syrian civil war — a foreign policy issue sure to be front and center for the 45th president's agenda — does Donald Trump support Syria's Bashar al-Assad and Russia? Well, it's a little bit complicated.

First, let's take a look at the Syrian civil war timeline. Syria's current instability is a result of Arab Spring uprisings, which took place throughout the Middle East and Northern Africa starting in late 2010. The Arab Spring made its way to Syria in early 2011, as Syrians protested President Bashar al-Assad, who is for all intents and purposes, a Syrian dictator. Since then, the Syrian civil war has morphed into a sort proxy war between international powers, including Russia and the United States: Russia backs Assad while the United States has supported the Sunni rebels fighting Assad's regime. So, what does Trump have to say about Syria? Here's what he's said on the record.

Trump initially backed off on a hard stance on the Syrian conflict, but during the fall of 2015, Trump finally spoke about Syria and Assad's leadership, but within the context of fighting ISIS. In an interview on 60 Minutes, Trump said:

Trump Has A Bit Of A Thing For Russia's Putin

"If he says great things about me, I'm going to say great things about him [Putin]," Trump told NBC News in September. A year ago, Trump even told FOX News that, "I think in terms of leadership, he's [Putin's] getting an A and our president [Obama] is not doing so well." Trump's statements on Russian President Vladimir Putin have repeatedly fallen anywhere in the range of "Best Buddy" to "Political Fetish" during the campaign thus far. Many strategists, both Republican and Democrat, have found Trump's idol worship of Putin uncomfortable at best, and possibly damaging for his presidential run at worst.

Trump Needs To Make Up His Mind

Here's where it gets particularly muddy: Trump's man crush on Putin would seem to put him at odds with Assad's regime — but, as with most international politics, it's far more nuanced than that. In September 2015, Assad requested Russia's military support to fight jihadist rebels — specifically, members of ISIS operating in and against Syria. Unfortunately, Russia must have pretty bad aim, as reports claim that Russia has intentionally targeted Syrian civilians — killing over 2,000 by March 2016 alone — and the implication being that Russia is helping Assad defeat rebels opposed to his regime, not just ISIS rebels operating within the country. Russia appears to be helping both sides of the Syrian conflict, which would otherwise be its own conflict of interest.

Oh, and to add more kindle to the political bonfire, Trump's business dealings with Russia have also been repeatedly called into question throughout his campaign. Still following?

So far, it seems that Trump has taken a "Syria-Assad bad, Russia-Putin good" stance on the whole matter — but at Tuesday's vice presidential debate, Trump's running mate, Indiana Gov. Mike Pence, went way off script on Syria and Russia, saying: "The provocations by Russia need to be met with American strength." Pence even called Putin a "small and bullying leader," a description in sharp contrast to Trump's views on Putin and Russian involvement in Syria.

With Pence's Syrian plan differing so drastically from his running mate's, it's up to Trump to finally take a hard stance on the Syrian conflict and both Assad's and Putin's involvement. As of Wednesday morning, the Trump campaign hasn't yet responded to or clarified Pence's proposed Syria plan — a silence that speaks all too loudly about Trump's foreign relation inexperience.