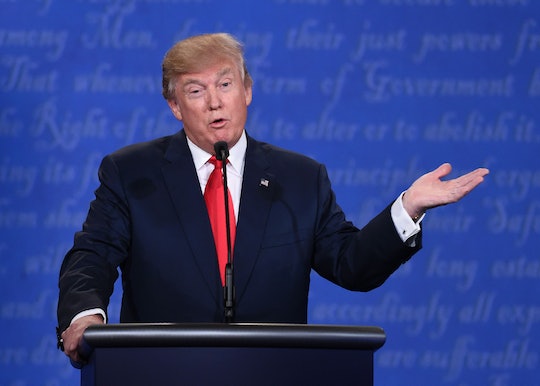 During the final presidential debate of 2016, moderator Fox News' Chris Wallace didn't waste any time getting to the social issue many have been asking about: abortion. Although the candidates had equally passionate but vastly different stances, when Wallace asked a very specific question of the candidates about the law governing abortion in the United States, their answers had many asking does Donald Trump want to overturn Roe V. Wade?

In the past, Trump has also gone on record saying that he would propose a ban on abortions, adding that there would "have to be some form of punishment” — not just for those who provide abortions, but the women getting them. (According to The New York Times, Trump later recanted the statement.) It's worth nothing that his stance on abortion has changed frequently throughout this life. In an interview with NBC's Tim Russert back in 1999, Trump said he was "very pro-choice.":

I hate the concept of abortion. I hate it. I hate everything it stands for. I cringe when I listen to people debating the subject. But you still — I just believe in choice.

When Russert then asked Trump if he would ban "partial birth abortion", he said he would not. Which certainly wasn't the tone of his response during the debate. When asked directly about the fate of Roe v. Wade should he be elected president, Trump said: "The justices that I'm going to appoint will be pro-life. They will have a conservative bent," then added in regards to overturning Roe v. Wade specifically, "It'll happen automatically in my opinion because I am putting pro-life justices on the court."

The law in question, which gives a woman access to safe, legal abortions, stems from the landmark 1973 ruing in the Roe v. Wade case. Before the case, abortions in the United States were mostly illegal across the board, with the exception of a few states. If a woman was seeking an abortion, she often didn't have access to safe measures of procuring one. When Roe v. Wade declared that a woman had the right to choose, it also included an important allowance for abortions later in a pregnancy if the mother's life was in danger. Therefore, abortions later than the first trimester were only legal if continuation of the pregnancy put the mother's health at risk.

When Trump was posed questions about these abortions that occur at later term, his answer made many wonder if he actually understood the concept at all.

Trump has mentioned before that his shift from being "pro-choice" to "pro-life" came largely due to "personal stories" he heard from people in his own life:

One thing about me, I'm a very honorable guy. I'm pro-life, but I changed my view a number of years ago. One of the primary reasons I changed [was] a friend of mine's wife was pregnant, and he didn't really want the baby. He was crying as he was telling me the story. He ends up having the baby and the baby is the apple of his eye. It's the greatest thing that's ever happened to him. And you know here's a baby that wasn't going to be let into life. And I heard this, and some other stories, and I am pro-life.

Clinton responded to the same questions about abortion by stating: "I strongly support Roe v. Wade, which guarantees a constitutional right to a woman to make the most intimate, most difficult in many cases, decisions about her health care that one can imagine." Clinton also reiterated that she supports Planned Parenthood, which Trump has said he would defund as long as they continue to offer abortion services. According to Planned Parenthood, only 3 precent of its services are abortion-related, and the majority of the services they are provide are preventative screenings, birth control, and routine reproductive healthcare. Whether a woman needs access to routine screenings, birth control, or safe and legal abortions, her right to choose what’s best for her body is the foundation of Roe v. Wade; and it's a right that should be protected.