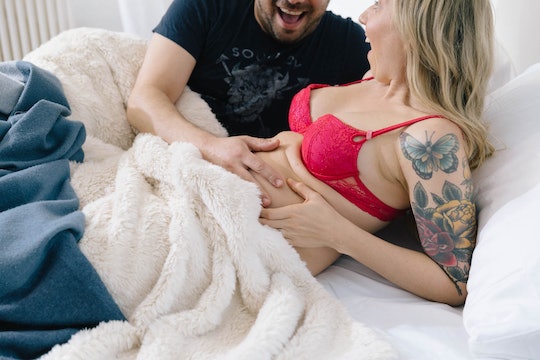 Turns Out, Drinking Soda May Make Your Baby Kick More

There are many "best of" moments that come with the news of pregnancy, like seeing your growing baby on an ultrasound and hearing the first heartbeat. But by far, one of the most fascinating — and even a little freaky — is the instant you feel your baby move. But even though everyone says you’ll know it when you feel it, your curiosity has you wondering how to instigate movement. Gently poking at your belly and having a snack are all said to work, but what about a liquid jolt? Does drinking caffeinated soda really make your baby move?

"Caffeine is a stimulant and can cause increased movement in your baby," says Dr. Nina Ali, an OB-GYN at Baylor Obstetrics and Gynecology at Texas Children’s Pavilion for Women, in an email interview with Romper. "This effect will be more pronounced in a woman who has not been regularly drinking caffeinated beverages, and will be less noticeable in a woman who has a daily caffeinated beverage."

That means it’s time to gauge your daily caffeine intake. As a rule, experts recommend women consume less than 200 milligrams of caffeine per day in order to decrease miscarriage risk. That’s about one 12-ounce cup of coffee or two 20-ounce bottles of Diet Coke.

According to Baby Center, chatting with your baby, singing a lullaby, shining a flashlight on your belly, and even doing jumping jacks, can help get your little one moving. Ali says a little bit of sugar — shouldn’t be a problem, right? — can also spark a few kicks. There are some instances, she says, where a baby is not moving enough, requiring a doctor to take other measures.

"To assess the well-being of a baby who is moving less, a healthcare provider may use an acoustic stimulator, which uses sound and vibration to stimulate baby movements," Ali says.

As for when you will feel your baby kick, WebMD noted it will occur around weeks 16 to 25 — I know, nothing like a giant time window, right? But when it does finally happen, moms say it feels like a hopping frog, "incredible," and even a punch to the vag.

Tiny miracles, am I right?