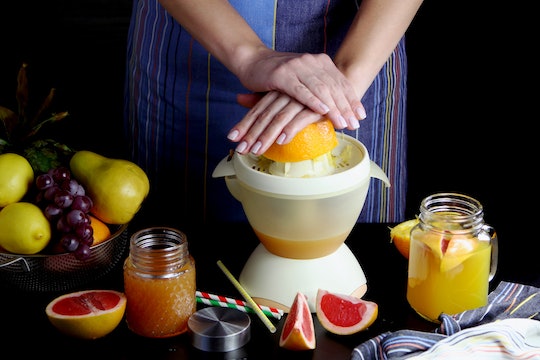 If You're Chugging Grapefruit Juice For Your Fertility, Here's What You Should Know

When I was trying to conceive, I would spend time lurking around online fertility forums to find successful fertility remedies and tips, and I would actually pay attention when my family and friends would offer their own snake oil type cures. I was at the point where I was willing to try anything, and if you are in the same boat, you may know what it feels like. These days, grapefruit juice is being touted as a fertility booster, but does drinking grapefruit juice help you get pregnant?

In an interview with Romper, Dr. Jennifer Hirshfeld-Cytron, Director of Fertility Preservation at Fertility Centers of Illinois, says that there isn’t really a list of foods to eat or avoid to help you when you are trying to conceive, but drinking grapefruit juice is perfectly fine. She suggests (rightfully so) that as a whole, people should be eating a healthy diet with less processed foods, more vegetables, more fruits, and whole grains. She says, however, that when it comes to fertility, losing weight could help. “If you are overweight or obese, losing weight is important to optimize fertility,” suggests Hirshfeld-Cytron, “and losing as little as 5 to 10 percent of weight can have a huge impact on fertility potential.”

The claim to fame for grapefruit juice is that it helps improve your cervical mucus, explained Ava Women, but there is no scientific evidence or proof to back it up. The article noted that grapefruit juice contains furanocoumarins, which are known to disable cytochromes responsible for breaking down certain hormones. In theory, the furanocoumarins in grapefruit juice could temporarily disable the CYP3A4 cytochrome, which plays a part in bringing down estrogen levels in your body. High levels of estrogen are attributed to giving you that infamous egg-white mucus, and when estrogen is allowed to stay in your body longer, it could possibly result in a better consistency of cervical mucus.

So how can that play a part in getting you pregnant? According to the American Pregnancy Association (APA), when estrogen levels surge around the time of ovulation, your cervix secretes a more fertile-quality mucus, known as egg-white cervical mucus. It is called egg-white, because it’s clear and stretchy like an egg white, the website explained, and it is the perfect consistency to support the sperm's journey through the cervix, uterus, and fallopian tubes, where it meets and fertilizes the egg.

The APA noted that when you have a sufficient amount of egg white cervical mucus, it can improve your chances of getting pregnant, allowing an easier path for the sperm to meet the egg. So if the grapefruit juice does temporarily allow your estrogen levels to flourish, you could possibly see a change in your cervical mucus, but there is no guarantee. Ovulation and timing play the biggest part in conception, along with other reproductive factors and considerations, so you should probably not rely on grapefruit juice alone.

For the most part, grapefruit juice is a healthy drink that tastes great, so it can’t hurt to have a glass every now and then. As far as it being the holy grail of fertility, it may help boost your cervical mucus factor, but just keep in mind that it might not be the comprehensive solution you are looking for.