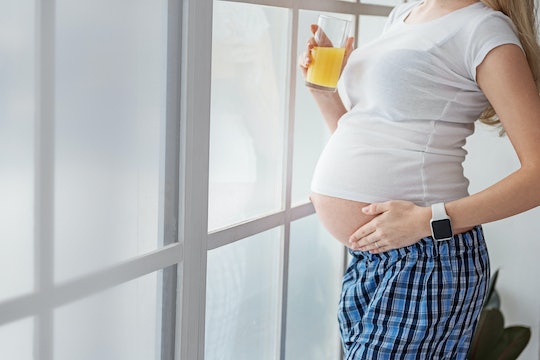 This Is Why Drinking Orange Juice Makes Your Baby Move, According To OB-GYNs

If you're pregnant and you've felt your baby move, you're probably pretty obsessed with it (and you also might think it's kind of weird, because it totally is). As you get into late pregnancy, your doctor may encourage you to count kicks every once in a while, and they may even mention that you can drink some orange juice if you haven't felt the baby in a while. But why? Does drinking orange juice really make your baby move?

According to Dr. David Rivera, M.D., Fellow of the American Congress of Obstetricians and Gynecologists (F.A.C.O.G.), "The sugar in orange juice can stimulate babies in the same way energy drinks may stimulate teenagers." Sometimes, Rivera tells Romper, if women have a non-reactive stress test or haven't eaten in awhile, juice at doctors' appointments is given to see if the baby perks up.

Babies also go through sleep cycles in utero, adds Dr. Sheeva Talbein, M.D., F.A.C.O.G. "When a pregnant woman drinks juice, it will spike her blood sugar," Talbein tells Romper. "This also causes a spike through the placenta and can sometimes 'wake' the baby and get him to move."

This information comes in handy later in your pregnancy, when many doctors encourage daily "kick-counting." According to the American Pregnancy Association (APA), being attentive to your baby’s movements will help you notice any significant changes going forward.

Most mothers find their babies are generally more active after they've eaten a meal, or at least have had something sweet, so a glass of OJ can help you to get that babe moving when you're trying to count kicks. (Although, the heartburn it causes may mean you need to pick up an extra pack of Tums every time you get a new glass of juice.)

And, if you're morally opposed to orange juice, a bowl of ice cream might even suffice.