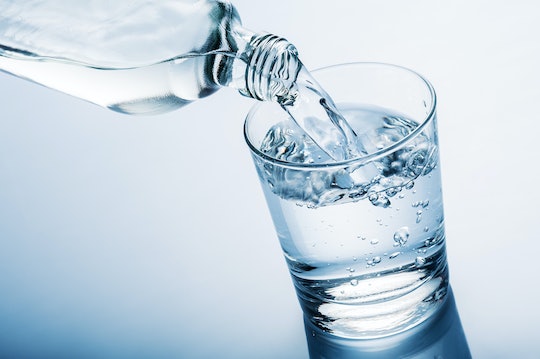 As far as basic life necessities go, water has become exceptionally trendy in recent years. Plenty of people are more aware of their intake than ever, and they tote around giant water bottles all day to make sure they get those crucial two liters in. Everyone from athletes to office workers are very much on board Team H2O. So it stands to reason that drinking water could help out one of the most grueling endurance events of all: childbirth. With this in mind, does drinking water help induce labor or will it just result in many more annoying bathroom trips?

This may be one decision you have to make on your own, because there does not seem to be an abundance of scientific study on the effects of water drinking on labor. According to Trimester Talk, however, there is anecdotal evidence that drinking warm water may help induce labor. Although this advice may need to be taken with a grain of salt, it's probably in the might-help-can't-hurt camp.

Chances are, you're also encountered the idea that drinking tonic water in particular may help hurry up labor. According to the Telegraph, the quinine in tonic water is thought to spur the release of oxytocin, which may help produce contractions. Although it is a popular sort of folk remedy for a too-long pregnancy, the scientific evidence supporting these claims is admittedly a bit thin. Quinine for labor induction was debated in the British Medical Journal in March 1946. Furthermore, the BMJ notes put it somewhere between "a most helpful procedure" or a practice that could "court disaster," so it may be safe to call that particular debate a draw. To be on the safe side, you may want to check in with your own doctor about the use of tonic water for labor induction — hopefully your OB will have access to some newer studies.

With all of this in mind, sipping plenty of plain old water is probably a good move. In fact, drinking enough water may help prevent premature labor from happening. According to the American Pregnancy Association, dehydration may cause contractions to start way ahead of time. For this reason, it's smart to stay hydrated all throughout your pregnancy, especially into those final days. If nothing else, you can be properly hydrated in advance of the marathon that is childbirth.