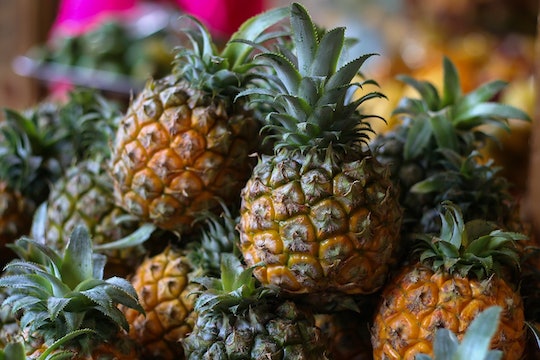 Does Eating Pineapple Help When TTC?

I love pineapples. I love them so much I should probably marry them. But I may never eat another pineapple again. At least not if they do what people on the trying to conceive (TTC) forums claim. But is it true? Does eating pineapple help you get pregnant? This is information that would've been really helpful to me when I was going for broke trying to make a baby, but now it just makes me want to run from Dole faster than you can say, "add Malibu."

Pineapple, in general, is a super healthy food. Actually a grouping of berries, pineapple is chock full of vitamin C, manganese, and thiamine, which is a crucial B vitamin that isn't in a ton of foods, according to Live Science. Pineapple supports the immune system, contributes to bone health, provides steady energy for your brain and body, has anti-inflammatory benefits, protects eye health, and even combats the symptoms and viruses that cause the common cold. It's a nutritional powerhouse that is relatively low in calories and tastes spectacular when blended with ice and gin, or just sliced up on a plate with some chili powder and salt. What more could you want in a fruit? Well, what if it also helped an embryo implant in your uterus?

Can eating pineapple help you get pregnant? How would that even work? The science of it is absolutely sketchy. It's essentially an old wives' tale with very little data and research to back the claims up in any meaningful way. However, when it's broken down, individual parts of the claim make sense. For one, the fiber, bromelain, which is an enzyme found in pineapple (specifically the core of the pineapple), has been shown to mildly aid in the implantation of the embryo into the lining of the uterus, according to Parenting magazine. Also, the beta carotene and anti-inflammatory agents in the pineapple may decrease inflammation in the mother's body, which according to an article in the journal Reproductive Sciences, can make a body more receptive to conception.

That's all well and good until you read what these TTC boards are suggesting. Across six different TTC boards that I sifted through, women are told to eat one whole pineapple or several pineapple cores a day for up to five days after ovulation. That's a ton of pineapple. Also, it's worth remembering that in order to get enough bromelain, which is the enzyme everyone's after after, you'd need to eat the equivalent of 10 pineapples, according to Healthline. Oh, and in one day. Not only does that seem like a recipe for mouth pain hell, it's also a ton of sugar.

Maybe eating pineapple doesn't help you get pregnant, but it does make a fabulous cake, so call it a draw? Either way, if you want to throw some extra chunks of the tropical fruit in your smoothie, it probably won't hurt. But it's unlikely that your doctor will recommend pineapple as a fertility drug.