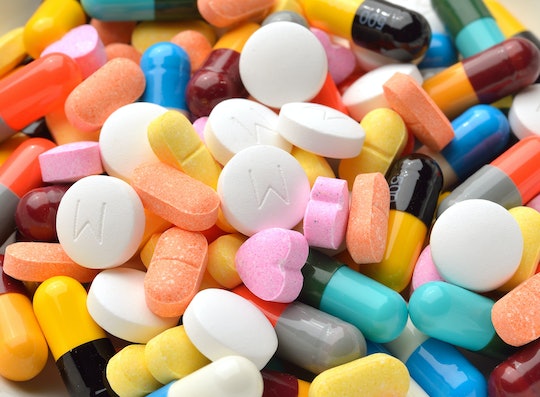 This Is How Ecstasy Can Affect Fertility In Men & Women

When you and your partner decide that it's time to try to conceive, you probably start to wonder about all of the things in your life — even if they're experiences from your past — that could have had even the slightest impact on your fertility or that of your partner. Marijuana, opiates, cocaine, and amphetamines (and more) are all possible drugs that you could've experimented with at one point or another, even if you never regularly used them or it's been awhile since you did. You may be wondering, then, does ecstasy affect fertility? Does marijuana? What about opiates? And if they do, how so?

It's estimated that about 10 percent of people over the age of 12 used an illicit drug last month, as reported by the Centers for Disease Control and Prevention (CDC). That might not seem like a lot, but whether you mindfully decided to do so or a wild night just got a little out of control, if these drugs can affect fertility, it can be a big-time issue. It turns out though, that while the effects on women's fertility are not yet definitively clear, they do affect the fertility of the male's reproductive system. However, the answer is a bit more complicated than just that.

Women, unlike men whose sperm supply replenishes regularly, are born with a set number of eggs with which to reproduce. Therefore, if a woman has used a drug that may impact the eggs in her system at some point, the damage is done, and there's no waiting until your body has produced more eggs.

When you're looking at the effects of ecstasy on fertility, it's really a more complicated question than simply considering ecstasy itself. "There are no specific scientific studies showing the effect of MDMA/ecstasy on fertility. It is in the same category as “amphetamines” like methamphetamine, speed," Dr. Salli Tazuke, co-founder and co-medical director of CCRM San Francisco tells Romper via email. "Most people using MDMA/ecstasy tend to also use other recreational drugs, smoke and drink as they are often exposed to these at parties. We know that amphetamine class of substances are associated with poor development of the baby, where they tend to be smaller, lighter, and noted to have smaller heads than similar gestational age groups. Again, because users typically are on other substances as well, and because there is generally poorer prenatal care associated with recreational drug use, it is hard to tease it apart, but amphetamine class drug users have higher association of giving birth to babies developing cardiac arrhythmias, hypothermia, seizures and stroke during the neonatal period."

Drugs, however, seem to impact male fertility. In an interview with Vice, Dr. Ricardo Yazigi said that though there's not a lot of solid research in this area, ecstasy can affect testosterone, which, in turn can affect the DNA of sperm, as well as potentially cause issues with the tissue inside the testicles. It can lower sperm count, which could translate into it being more difficult to conceive. Given that men regularly produce sperm over the course of their lives, however, within about three to six months after he stops taking ecstasy, a man's sperm production should normalize, but that for some men it could take longer.

Given that there are many risks to your baby, if you're currently experimenting with ecstasy and other amphetamines, it's best to avoid getting pregnant or make an attempt to stop using them. Ultimately, the verdict is still out on whether or not ecstasy truly can affect your fertility or your partner's. Because it's something that scientists, medical professionals, and other experts don't yet seem to have a clear grasp on, you're better off avoiding any and all illicit drugs, as well as tobacco and alcohol, which may also affect fertility, as Addiction.com noted. While it might seem severe, these drugs can harm your health in other ways as well. Even if it doesn't affect your fertility itself, it undoubtedly can take a toll on your body as well as that of your baby's.