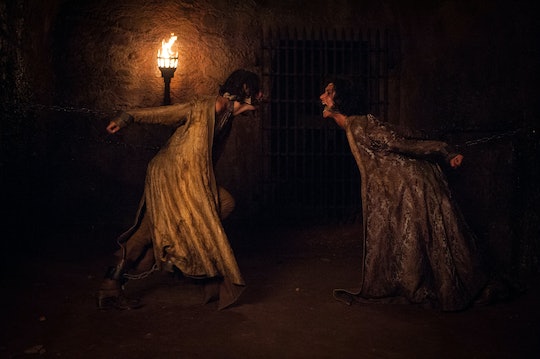 Ellaria's Fate On 'Game Of Thrones' Is So Heartbreaking

The Sand Snakes met a horrible end in Season 7. Though some fans believe they got what they deserved, their demise was still heartbreaking to watch for many, especially what happened to Ellaria. After Euron took over Yara's ships, he took Ellaria and her daughter, Tyene, as well as Yara, captive. Ellaria and Tyene were then given to Cersei as her "gift." So does Ellaria die on Game of Thrones? Unfortunately, her fate was much worse.

Cersei is obviously the queen of revenge, so to get Ellaria back for killing her daughter, Myrcella, Cersei went with the "eye for an eye" approach. Ellaria and Tyene were chained to opposite sides of a cell, and gagged so they couldn't even speak to each other. Cersei then kissed Tyene with the same poison Ellaria used to kill Myrcella. She then explained to Ellaria that she'll be kept alive in the cell, force fed food if she refused to eat, just so she could live and watch as Tyene died and her body decomposed.

Though some fans were still hopeful this wouldn't really be the end for Ellaria, Indira Varma, who plays the character, revealed that was Ellaria's final scene on the show. "I still live in hope that somehow Ellaria will be saved, either by a repentant Cersei who needs her on her side or by [Daenerys Targaryen's] team... but I doubt they've even give her a second thought," she told Newsweek. "She's too much of a loose cannon."

Besides Ellaria's lack of level headedness, Varma believes being trapped in a cell with the decomposing body of her daughter will certainly be enough to drive Ellaria mad, making her even less useful. "I imagine Ellaria will go insane and then have lucid moments where she tries to find a way out for her and Tyene—clutching wildly at any false hope of freedom which will send her more mad," Varma stated in the same interview. "How gruesome."

It is indeed a gruesome punishment and though Cersei is still a villain, many viewers had to admit her vengeance was justified. As Tyrion pointed out in Episode 2 of this season, Myrcella was an innocent. It wasn't her fault that Oberyn died, and it wasn't even really Cersei's fault. If anything, it was Oberyn's hubris that led to his downfall.

This isn't to say Ellaria got what she deserved, but she definitely wasn't innocent. Even so, it's still disappointing to say goodbye to her, especially in this way.