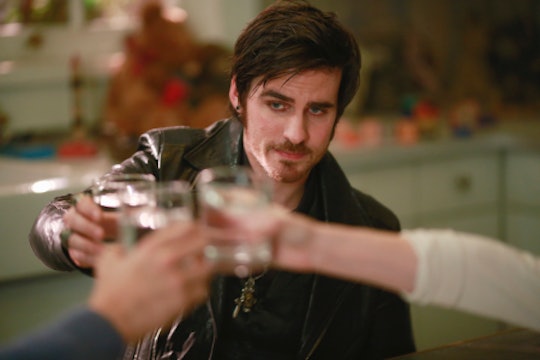 Does Emma Deserve Better Than Hook On 'Once Upon A Time'? Regina Apparently Thinks So

The latest episode of Once Upon a Time focused in large part on the relationship between Hook and Emma, and their interactions prompted viewers to argue that Emma deserves better than Hook, using the hashtag #EmmaDeservesBetter. They argued that it’s high time the savior told her wayward boyf to walk the plank. And both Regina and Hook himself appear to agree.

The world’s sexiest Captain Hook (played by Colin O’Donoghue) first appeared on Once Upon a Time in season 2, filled with roguish charm and a shady past. His rakish flirtations with Emma began almost immediately and sparked a die-hard shipper movement for “Captain Swan.” By the time they got together for real, after the heartbreaking death of Neal (RIP Baelfire!), fans were pretty convinced they’d be together forever.

The relationship hasn’t been the smoothest, however, and it certainly has been met with chagrin from non-shipping fans. According to some, Hook’s bad-boy history and certain courtship tactics (dogged determination to secure Emma in the end being one of them), don’t make for the best boyfriend material. For example, Hook was once a pretty prolific murderer, and still wears a ring for each victim as a memento (trophy?). Fans have also been a little disappointed by Emma’s storyline this season being almost entirely about her boyfriend.

In this week’s Hook-centric episode “The Brothers Jones,” Hook initially tries to push Emma away. As she leans in for a kiss, he turns his head away. After all, he reasons, he gave into the darkness instantly, while she fought it. He’s not worthy! His brother Liam, however, seems to think the opposite. In a little one-on-one, he urges Emma to let Hook go after they've all escaped because being without her is really the best thing for him. Eyeroll.

Emma recounts the story later to everybody’s favorite ride-or-die and formerly evil queen, Regina. “He doesn’t think I’m good enough for Hook.” Regina echoes the sentiments of pretty much everybody when she scoffs, “To be honest, you’re too good for Hook.”

So does Emma deserve better than Killian Hook? Emma's a strong woman, and she's proven time and again that she can hold her own against anybody. (Remember that sword fight?) And nobody can deny the crazy-hot chemistry between these two. But what she definitely does deserve is a storyline that doesn't revolve around the guy she's dating. Now that all seems to be well in paradise again, hopefully we'll see her being more badass than ever before.