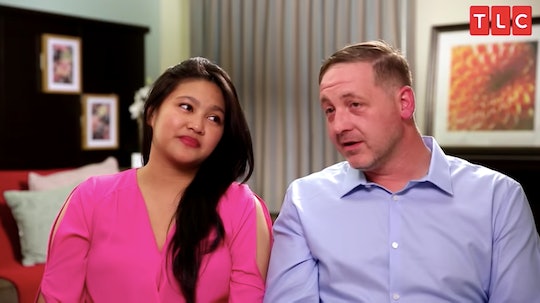 Things have been rocky between Eric and Leida on TLC's 90 Day Fiancé ever since she left Indonesia to stay with him in Wisconsin. She hasn't quite adjusted to how different his life is from the one she knows, and blending their two families hasn't been easy either. Leida's young son Alessandro lives with them, as did one of Eric's daughters for a time. But does Eric's daughter still live with him and Leida?

Eric is a father of three daughters. Though 21-year-old Taneil and 11-year-old Jeneka may be regular visitors, it was 19-year-old Natasha (also known as Tasha) who shared the space with him — and then Leida and Alessandro. There was some drama courtesy of Tasha in the first episode, when Eric and Leida arrived home to find the apartment in total disarray; Eric explained that Tasha had left it that way. That wasn't the most auspicious way to begin their lives as a blended household, and it doesn't look like the living arrangements have improved since then.

Social media has made it clear that there's no love lost between Leida and Tasha. Leida posted an Instagram story, screencapped by a user on Twitter, in which she photographed a messy room with the caption, "Okay Tasha...this is your room. Or 'was' should I say. Don't lie Tasha. Stop making lies Tasha. You're dirty Tasha. Admit your mistake. Own it! [sic]" As a terrible man in an episode of Mad Men once said, that is...not great, Bob.

Leida felt the messy apartment was a passive aggressive way for Tasha to make her disapproval of her father's relationship clear. However, according to Soap Dirt, Tasha stated on social media that she had been out of town because she was traveling for work and that the mess was all her dad's. Leida's Instagram post seems to have been a response to that, with both women accusing the other of lying.

Leida apparently received death threats in the wake of her Instagram story, which she addressed in another post. In the comments section, Tasha responded, writing her own explanation of what happened:

A big thank you to everyone who has been trying to be supportive of me. I apologize for the photo of my old room you saw. Yes. It was messy. But as you'll see me explain in a later episode (depending on what TLC kept) I was not only trying to prepare for a convention but trying to move out. That picture is from the day she and my father kicked me out. I had to sleep on the floor because they took the cushion to my futon. Thank you everyone who has tried to stand up for me to her, and I'm so sorry she's making memes and threatening and harassing and etc... I'm so sorry.

Though social media indicates that Leida is getting along well with Eric's youngest daughter Jeneka (they've been on quite a few family outings together), it doesn't seem like one could say the same about her and Tasha.

Leida and Tasha got off to a rocky start and it looks like it's only gotten worse since then. Tasha no longer appears to live with her dad, either. Perhaps the rest of this season of 90 Day Fiancé will make it clear exactly how the situation became so tense.