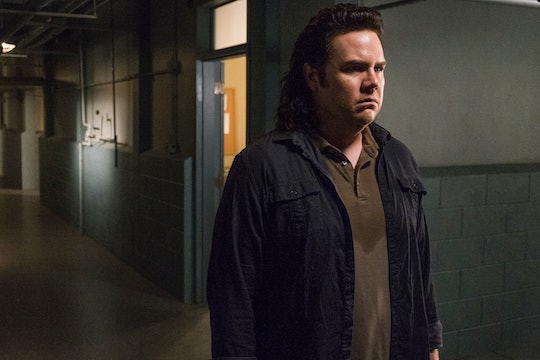 Eugene Could Be In Danger On 'The Walking Dead'

After Eugene turned traitor on Rick and the rest of Alexandria, a lot of love was lost between him and the audience. No one is feeling very fond of Eugene right now, and he's walking a dangerous line as he tries to keep himself alive. But will his efforts be in vain? Does Eugene die on The Walking Dead?

The more dedicated Eugene becomes to Negan, the less likely it is that he'll be able to be redeemed. In "Time for After," Eugene made it clear that he cared about himself and no one else. Though he protested that he wanted to protect the "innocents" at the Sanctuary, he was willing to risk all the other innocents out there who could become Negan's victims in the future. As long as Eugene himself emerged relatively unscathed, then it was fine.

If Eugene remains firmly on Team Negan, then he could become a casualty in the upcoming war. His former friends might not want to kill him, but knowing his loyalties lie with the other side might give them no choice. However, that doesn't mean that Eugene's death is a definite; things are fraught right now, and nearly every character is in danger of potentially biting the dust. Some fans might want Eugene to die, but it's not certain that he will.

Eugene has luckily evaded death more than once, even in this episode. Dwight and Eugene both have the power to blow each other's covers and cause each other's deaths, but they're refraining for now. That slippery quality of Eugene's that kept him going through the apocalypse could get him out of this most recent struggle, but viewers have to wonder just how many chances he'll get. If and when the Saviors are defeated, then karma is going to come for Eugene.

The Saviors did lose the battle in the comics, though Eugene was not among their ranks, and it didn't result in death for all. Negan was imprisoned instead of executed and the community continued under different leadership. While Eugene's treason might net him some kind of punishment, if the show allows Negan to live then one would assume that Eugene will be allowed to live as well. Maybe he'll get a cell right next to Negan's.

Unfortunately, Eugene's comic storyline doesn't provide much help when it comes to figuring out how his arc on the show could end. Things went very differently for Eugene in the comics, because he didn't waver in his loyalty to Rick. After Abraham's death and the war agains the Saviors, Eugene became involved with Rosita, though she was killed by a new group threatening the communities. He later began a relationship with a woman via CB radio.

It's hard to imagine the Eugene from the TV adaptation following in those footsteps. After he turned down Rosita's offer to help him escape from the Sanctuary in Season 7, she's unlikely to trust him ever again, let alone start to date him. He betrayed everyone and it would take a lot of work to rebuild those relationships. It's possible that could happen in the future, but the outlook isn't great for Eugene.

That said, there's only a fifty-fifty chance that Eugene will die, which is true of nearly every other character on the show (except Rick; he'll be fine). Eugene's actions may have put him in more danger, but anyone could go at any time. It's equally plausible that Eugene will find a way to survive against all odds, just like he has all this time. This war won't be without casualties, but Eugene has more than proven that he's capable of evading the consequences.