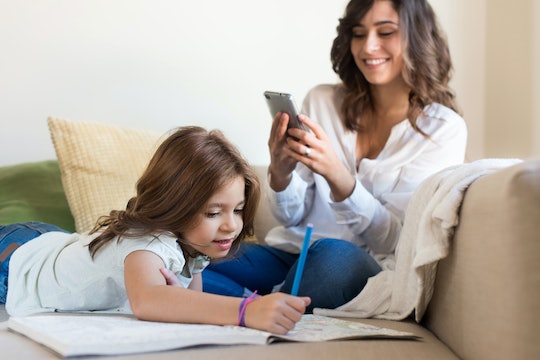 Experts Explain Why & How Excessively Checking Your Phone Affects Your Kid

With smartphones at our fingertips, quite literally, it's easy to get sucked into the constant updates, notifications, apps, games, emails, work, texts, and the list almost never ends. Being present in the moment and unplugging is becoming less and less common in adults and kids alike. As parents who always want to stay connected, sometimes it's easy to ignore how excessively checking your phone affects your kid later in life, and the example that it sets as a whole.

According to Healthday, kids whose parents are constantly distracted by the alerts on their phone, or just drawn to get sucked into technology in general are "more prone to misbehaviors, such as whining, sulking and tantrums." These findings are based on research that was reported in the May 2017 issue of Child Development, and it's no surprise. Think about how annoyed and frustrated you get as an adult when someone's attention is constantly pulled away from you, and how much harder it must be for a child to process that.

Although I enjoy a break on my phone while the kids play as much as the next mom, I really try to stay mindful of how my connection to a phone looks to my children. As a part of the generation of kids that grew up during a time both before and after smartphones were a big deal, I'm still nostalgic over the type of interaction that occurred between people before checking your phone was the number-one way to communicate. Call me old fashioned, but I firmly believe it's important to preserve a piece of that in an ever-growing culture of electronics and technology.

In order to do this, one of the best ways I find to set boundaries is to understand the effect of letting your phone rule you versus controlling how and when you respond to your phone. Recently, Common Sense Media partnered with Will Ferrel to give parents some perspective on what it looks like to excessively check your phone. Although exaggerated and humorous, the campaign is still eye opening.

Aside from viewing a scenario where you can see the immediate reaction from children, there are also more studies being done to show how parents connection with their phone influences or changes kids' behavior in the long run. For example, WebMD shared that "Young children whose parents interrupt family time by pulling out their smartphones or tablets appear more prone to misbehaviors, such as whining, sulking and tantrums."

In the site's interview with assistant professor of human development and family science Brandon McDaniel, he brought up a captivating point: no one likes to feel as if they're not being heard or validated. Excessively checking your phone in front of any person — child or adult — can easily send the message that your phone is more important than the other party in that moment. Ultimately, parents know that's not true. However, there's something to be said for the phrase "actions speak louder than words" in these cases.

According to Time, there’s not much that’s more distracting than the constant notifications on parents' phones. In a study that was published in the journal Translational Psychiatry, scientists discovered that distracted parental attention can have big effects on babies’ development. In a research study conducted by Dr. Tallie Baram, the professor of pediatrics and anatomy-neurobiology at University of California, Irvine, and a group of colleagues set out to observe how consistency and disruptions affect motherhood. Based on studying rat behavior, they deduced that "there might be a similar critical time during which babies need to have a mom and dad’s reliable and consistent attention in order to form proper emotional processes. That includes knowing that at a certain time every day, for example, food will come, or that when a toy appears, mom will play. If mom is distracted by a call or a message alert, and turns to the cell phone instead, then this pattern gets broken and the crucial learning that should occur might not happen," Time reports.

“Predictability means we know that one behavior will follow reliably with a second behavior,” says Baram. “That seems to be engaging the pleasure system.” And we all know that cell phones throw predictability out the window, as we cannot anticipate when the phone will ding and require our attention. Though it is safe to say that we can expect to be distracted all day.

In the end, it's clear that babies and children are truly affected in an environment where parents are consistently checking their phones and jumping at every notification. Although the affects are primarily on development and ability to process pleasure, there are also immediate effects as you can see in Will Ferrel's campaign as a distracted parent at the dinner table. Overall, the immediate affects leaves children feeling ignored and unvalidated with a parent that's looking to their phone at every notification instead of a parent that's focused in the moment or what their child is saying.

If you want to avoid a lot of these issues, it's important to set boundaries in your home with phones. Consider having a period where you yourself remain unplugged, and remember to stay in the moment instead of checking notifications every time they go off. That funny comment your friend made on your latest Facebook post is probably not as important as spending real one on one time with your kids.