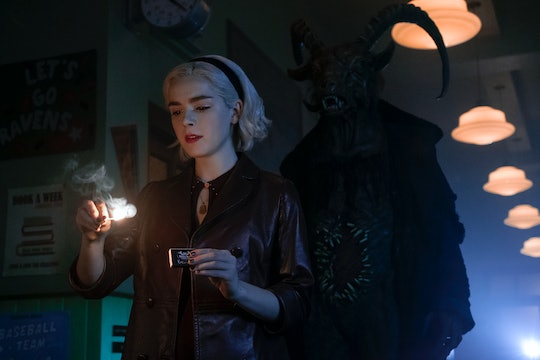 Fans have been ready for Part 2 of The Chilling Adventures of Sabrina for a while now and have made good use of their time by coming up with all sorts of theories. For example, the whole Zelda and Father Blackwood secret baby scandal unearths a lot of predictions — like if Father Blackwood wants to kill Sabrina in Part 2.

The short answer is, Father Blackwood has a lot of reasons to want Sabrina dead with everything unfolding, but that doesn't mean he'll actually try to kill her (yet) in Part 2. The High Priest of the Church of Night and Dean of the Academy of the Unseen Arts began as the Dark Lord's representative on Earth who appeared when the half-with-half-mortal, Sabrina, ran into trouble. When Sabrina doubted whether she wanted the Dark Baptism, it was Father Blackwood who felt determined to convince her to do so by accepting her as a student at the Academy. Still, Sabrina remained leery. Eventually, Sabrina went through with the baptism and the whole with thing got even more complicated — especially considering The Dark Lord's obsession with Sabrina, the fact that Blackwood was Sabrina's father's mentee once upon a time, and he's dating (?) her aunt.

Now that Part 1 is over, and you know Zelda kidnapped and hid Father Blackwood's baby in the finale, that complex relationship with Sabrina will likely get even more so. If you're trying to remember what happened, let me recap: Lady Blackwood gave birth to twins, a boy and a girl, and died during childbirth. Zelda lied and told Father Blackwood only one child — the boy – survived, knowing he only wanted male heirs to lead the Church of Night. In a move for protection against harm, she and sister, Hilda decided to raise the girl baby in secret.

While the baby was given up for witch-adoption in the holiday special episode, she could still be a big deal if Father Blackwood ever found out about her existence. But could his wrath extend to Sabrina? In promo clips for Part 2, he's obviously impressed at how far Sabrina has come in her powers, but think back at all he had to gain when Sabrina's parents died and what could happen if this secret baby is discovered. Surely, Sabrina will do anything to help protect her aunts, right?

Part 2 shows that Sabrina's powers may also be gaining strength, which may only make Father Blackwood angrier. That, plus the Devil longing for Sabrina's allegiance (possibly grooming her to be his right side gal in Hell) feels like, well, a lot. Then there's whatever he may be planning at the Academy with the warlocks that could impede on any part of Sabrina's life — specifically if he's trying to move back to the old, strict, and sexist ways of the coven. I don't think Sabrina will want to be any part of that which would give Father Blackwood another reason to try to kill her off.

While the answer isn't as clear-cut as you'd probably like, there's enough evidence mounting to support Father Blackwood may want to kill Sabrina by the end of Part 2. Whether it has to do with Zelda, Hilda and that secret baby or Blackwood's plans for the coven's future, something tells me Sabrina won't be one to stand around and take it.