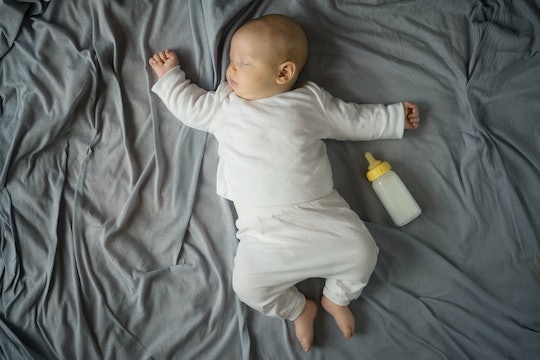 Confession: I am not a breastfeeding mom. My adopted daughter was on formula from the day I met her, when she was just 3 days old. I have, however, had numerous conversations with breastfeeding moms who hate the number of hours they're awake at night, endlessly feeding their babies. Some go so far as to suggest that formula would keep their babies in dream land for longer periods of time. But does formula really make babies sleep longer? While there's absolutely no shame in the bottle game (trust me), the answer probably isn't what every sleep-deprived mom the world over is looking for.

However, this isn't true for every baby across the board. Every baby has different digestion, sleep, and waking patterns, so your formula-fed baby might wake up just as often as a breastfed baby. KidsHealth explains, saying that newborns should be breastfeeding 8-10 times a day for their first month, which might mean they're feeding every 90 minutes when they are very young. However, some newborns can eat more volume at a time, meaning they might be able to enjoy 2-3 hour stretches between feedings.

BabyCenter reminds parents that newborns who are formula-feeding need to eat every 2-3 hours, too, but also encourage parents to keep an eye on their baby (or babies) to make sure he or she isn't getting hungry earlier.

According to KidsHealth, crying is actually a late sign of hunger, and you should be on the look out for more subtle cues your baby might be giving you that are essentially telling you they're hungry earlier than you initially thought they would be. For instance, newborn babies might pucker their mouths as if to suck, stick out their tongues, or even move their head from side to side trying to find a food source!

It's also important to remember that your baby might not cry only because they are hungry. Instead of an empty tummy, they might be overstimulated, bored, overheated, or desperately need a diaper change. If you've fed your baby recently, but he or she is crying, you might check to see if your baby has gas that is making them uncomfortable, or even just needs to change positions.

For example, my newborn niece sometimes just wants to be left alone after a feeding, preferring a few minutes of peace laying on a blanket on the floor to the constant stimulation we all try to lavish on her when she's awake. Hey, I can't blame her, and as a mother myself I'm not going to stand between a human being and their need to spend a few minutes alone.