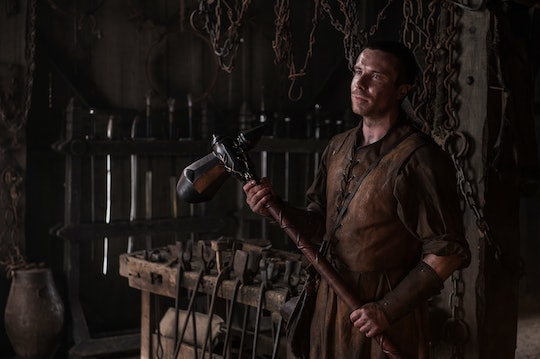 This Theory Could Explain Why 'Game Of Thrones' Brought Gendry Back

Here it is at last — the moment you've all been waiting for since your favorite burly young blacksmith rowed off into the night back in Season 3 of Game of Thrones. That's right, Gendry has returned, and fans are walking on sunshine. And now that he's back, there's only one question that matters (well, besides when he and Arya are going to reunite): why now? Surely he must have a major role to play, and some fans are wondering whether, because of his blacksmith background, Gendry may forge Lightbringer on Game of Thrones.

In case you've forgotten, here's the story of the legendary sword Lightbringer: thousands of years ago a hero, Azor Ahai, forged a sword that would help him fight the forces of evil. To finish it, he stabbed the sword through the heart of his wife, Nissa Nissa, which gave it the power to fight the Darkness... somehow. According to prophecy, a new hero will become Azor Ahai reborn when they draw a burning sword — Lightbringer — out of a fire.

There's a Lightbringer/Azor Ahai theory for pretty much every major character, plus a few minor ones. The prophecy is pretty maleable: Azor Ahai isn't necessarily a man, and Lightbringer may not be a literal sword, especially if you think about Daenerys as Azor Ahai. But what if it is an actual sword that someone needs to forge? Well, that would have been kind of difficult without a blacksmith. Good thing one just popped up again.

This Lightbringer theory isn't actually a new one: Redditor Lord_Varys first suggested that Gendry will forge Lightbringer four years ago, which is the last time Gendry was seen. Multiple fans will often come up with the same theory, so it's possible other redditors have suggested it as well, but this one is by far the most well thought out. This theory isn't necessarily saying that Gendry is Azor Ahai, just that he'll forge the sword, but really I think either option seems possible at this point. Other fans have suggested that Gendry may know how to forge Valyrian steel after all his time as a blacksmith's apprentice. That would also be pretty helpful since Valyrian steel kills White Walkers.

To be honest, though, there are so many Azor Ahai theories out there and they're all just valid enough to keep things ambiguous. The brilliance of the show is that, while it certainly feels more likely that it's going to be Jon or Daenerys, there's a lot of less obvious candidates who still could fit the bill: Jaime, Theon, Davos, and many others. It should be noted that the name Azor Ahai, which has been discussed in the book series, has not actually been mentioned on Game of Thrones; instead the show has used the term "Prince (or Princess) That Was Promised." "Azor Ahai" is just one of those things, like the valonqar or the three-headed dragon prophecies, that everyone somehow knows about even if they haven't read the books.

Whether or not he's the Blacksmith That Was Promised, it's good to have Gendry back. Hopefully it won't be a Rickon Stark-type situation where he's brought back only to be killed off an episode or two later. Now that he's north of the Wall trying to capture a wight (what could possibly go wrong with that plan?), I'm a little worried, but not too much: I have a feeling that Gendry will be serving a bigger purpose.