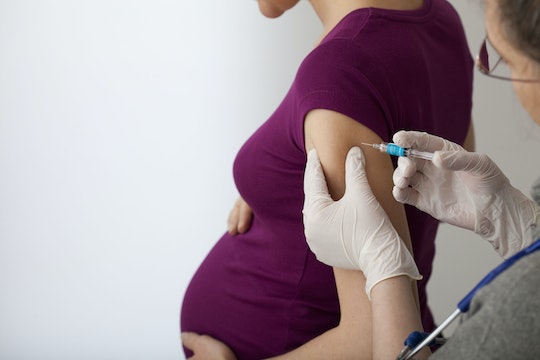 Through all the pokes and prods mothers-to-be have to endure to protect their growing baby, perhaps none seems as optional as a flu shot. After all, it's just the flu and we've all had to deal with a case at some point in our lifetime. It can't kill you, right? But doctors are becoming more insistent that pregnant women subject themselves to one more needle for a variety of reasons, but one that stands out is that the flu shot during pregnancy can protect your baby.

When asked about if the flu shot could protect your baby, Dr. Christina Greves, an OB-GYN at Orlando's Winnie Palmer Hospital, tells Romper, "I would say so. Getting the flu in pregnancy is bad — very bad — because pregnant women have an increased risk of hospitalization and it increases the risk of the baby. Getting the vaccine can help, and it all depends on how somebody presents from the flu."

The Centers for Disease Control and Prevention (CDC) warns that thanks to changes in immunity and organ function, pregnant women are more susceptible to dangerous cases of seasonal influenza during the second and third trimesters, and there are also risks to the fetus. A flu shot is the most dependable means to protect both mother and child, the agency continues, because it cuts the mother's risk of severe respiratory problems in half. Not only are women protecting their babies in utero, but that vaccination carries over immunity to the virus for the baby's first few months of life when they are unable to be vaccinated themselves. With guarantees like that, who wouldn't do it?

"Pregnant women are by nature immunosuppressed so we don’t attack the baby inside of us, so we get it worse," Dr. Greves continues. "You cannot give a baby the vaccine if they’re younger than 6 months old, so it’s helpful that the baby get passive immunity from the mom."

According to The March of Dimes, pregnancy complications that can be easily avoided with a flu shot are preterm labor, premature birth, and birth defects, all likely caused by high fever or acute respiratory distress in the mother.

In a fall 2017 survey conducted by the CDC, just at the beginning of last year's flu season, almost two-thirds of pregnant women had not been vaccinated against the flu. While most of the participating women were under the care of a doctor, a full 75 percent of them had been advised to get the shot, and 58 percent of them had actually been offered the opportunity. The agency says there is practically no risk to the health of the mother or her fetus from the vaccination, and the only people who need to be concerned are those with severe egg allergies. (But those with moderate sensitivities can receive the shot in a medical setting where professionals can manage the onset of symptoms.) Also, the shot does not contain the controversial additive thimerosal.

When you do give your doctor the go-ahead, know that he's not going to give you the nasal spray vaccine because it contains live viruses. You'll have to roll up your sleeve, look at the ceiling, and mentally transport yourself to a beachside cabana while they shoot you up with a few of the virus' dead carcasses. Fun!

So what happens if you ignore your doctor's advice and contract the flu? You'll have to get yourself back into their office immediately, noted The March of Dimes, for a round of antiviral medications like Tamiflu or Relenza to prevent the illness from worsening to the point where you and your baby are compromised. The CDC recommends taking the shot by the end of October so your body has a chance to ramp up its antibodies in time for the heaviest part of flu season, which falls between December and May. And if you think of all the indignities you have to suffer to safely bring your little one into the world, a little needle is peanuts compared to what could happen if you ignore your doctor's advice.