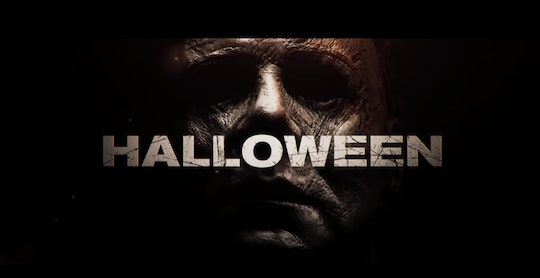 On Friday, Oct. 19, a long-anticipated sequel will hit theaters. Although the original movie came out in 1978, the white-masked serial killer, Michael Myers, is back yet again in the newest installment of Halloween. Except this time, the story starts 40 years after his initial killing spree on Halloween night — and Laurie Strode ends up coming face-to-face with Michael for a final confrontation. Those who are planning to catch the movie on opening night are probably wondering: Does Halloween have a post-credits scene?

To answer this question right off the bat, no — there's no reason to stick around after the movie ends because there is no last-minute plot twist or stinger. You'll be hard-pressed to find this information anywhere before opening night, though. However, Romper was invited to an advanced screening of Halloween — so I can tell you this for a fact.

According to USA Today, viewers can also expect to ignore the fact that the 1978 movie already has seven sequels — meaning the 2018 Halloween is a direct sequel from the original. Actress Jamie Lee Curtis — who has starred as Laurie Strode in about half of the sequels, explained the storyline started getting a bit hairy during Halloween II. This particular sequel was a continuation of Laurie's hellish night, featuring Michael hunting her down at the hospital. “They started having to add reason behind it all, when in fact there was no reason,” Curtis told USA Today. The movies after this included “more and more characters, more and more history that didn’t exist, and by the end of it, you have something that feels fairly heavy.”

According to The Verge, viewers can expect a very different type of Halloween this time around. Yes, you can absolutely expect the typical thrasher-esque violence to happen. But there's a deeper message, too. According to the publication, this installment of Halloween is about "the long-lasting effects of violence and how trauma impacts not just its victims, but the lives of everyone close to them." (Which is interesting, considering the current #MeToo movement.) In short, you can bet Laurie Strode is more than ready to face Michael again.

Forty years after her initial encounter with the killer, Laurie essentially lives as a hermit in the woods in her fortress of a home, according to IMdb.com. The trauma that she endured resulted in Laurie training her daughter, Karen, in self-defense and weaponry in preparation for Michael's return. This fixation however, also resulted in her daughter being taken away from her at a young age, as well as two failed marriages. As The Verge explained:

The one person who hasn’t written Laurie off is her granddaughter, but Allyson is constantly caught between Laurie and Karen, with her mother unable to forgive Laurie for essentially hijacking her childhood. Michael has been imprisoned for 40 years, but Laurie has never stopped living with him — and that’s forced everyone close to her to live with him, too.

To make a long story short, Michael ends up escaping from a sanitarium, and Laurie finds herself face-to-face with him once again. (Epic, right?) As the hours continue ticking down until opening night, fans are clearly looking forward to the latest installment of Halloween. One Twitter user wrote, "Counting down the days ,cannot wait to see it, #MichaelMyers#HalloweenMovie."

Another person tweeted, "Getting more and more amped for the @halloweenmovie on Friday. #HalloweenMovie#MichaelMyers#JamieIsBack."

Yet another Twitter user shared a video of "Michael" grooving to the original soundtrack, writing, "When you remember that @halloweenmovie is coming out this week. #halloween40#MichaelMyers#halloweenmovie." LOL.

So, will Laurie ultimately get her revenge on Michael? You'll have get a babysitter, head over to the nearest theater, and find out for yourself! Just don't both lingering after the credits start rolling.