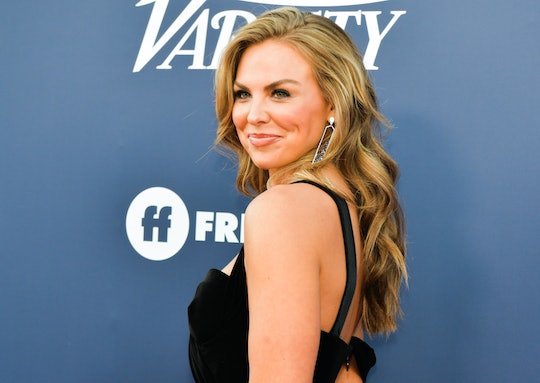 Going On 'DWTS' Is Actually ~Huge~ For Hannah Brown

Hannah Brown had a rough go of it on The Bachelorette and, instead of emerging with the perfect love story, she came out of the experience having learned the value of staying single and insisting on her worth. Needless to say, this was the perfect set-up for a Dancing With the Stars tour, and it was announced that Hannah would join the cast last month. But fans who plan to root for her want to know: does Hannah Brown have dance experience? As most Bachelor viewers know, the 24-year-old is an ex-pageant queen, so she definitely has experience performing.

In a Sept. 4 interview with Entertainment Tonight, Hannah revealed that she did take dance classes as a kid, but unfortunately, they were often a site for her struggle with perfectionism.

"I danced when I was younger, a lot of insecurities came from that," she told ET. "So being put back in that environment has really messed with my mind a little bit."

As a member of Bachelor Nation, Hannah's claim to fame was how relatable she was, and it looks like she's poised to carry that torch onto DWTS, as anyone who grew up in the real-life version of Dance Moms will be able to attest.

For better or worse, performing and competition dancing is a realm that often rewards unhealthy efforts toward perfectionism, so it's easy to see how Hannah might be slipping back into some destructive habits she's worked hard to overcome. It's also worth noting that it hasn't even been a year since Hannah found a way to grow out of her perfectionistic tendencies on The Bachelor, so her new skills are really being put to test here.

"I'll be honest, this is actually putting me back to a space that is not really comfortable for the new Hannah Brown," Hannah explained to ET. "I have grown so much and became a lot more self-assured and confident [since Bachelorette]. Going into this dance world is kind of sending me back into that pageant mind."

But she also described her DWTS experience as "fun" and "surreal," in the same interview, adding that she felt "excited" and "blessed" to be there. So it seems like Hannah is ready to embrace the good and the bad. Of course, there are physical consequences to jumping into the competitive dance world, too, in addition to emotional ones.

In a more recent interview with Entertainment Tonight, Hannah went on to describe the gnarly blisters she gets from ballroom dancing, the "disgusting" stinky feet, and the back pain. But ultimately, she feels confident in the technical side of her first routine.

"I know the dance. I have it to music," she said. "It is definitely not clean yet but I feel pretty confident. I feel like I could go out and dance it. Now, is it up to what I think I could be? No, but I still got some time."

It doesn't sound like picking up choreography will be a problem for the former Bachelorette, but whether she'll be ready to overcome the mental game is another story.

Dancing with the Stars airs Monday nights at 8 p.m. ET on ABC.