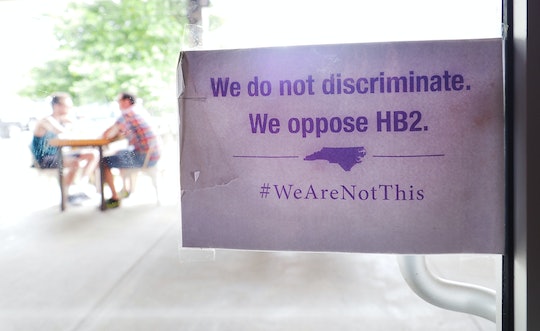 On Thursday, the North Carolina House of Representatives passed what it considers a repeal of House Bill 2, the state's discriminatory bathroom bill that singled out and stigmatized the transgender population. North Carolina's Republican lawmakers and Democratic Gov. Roy Cooper call the so-called repeal, known as House Bill 142, a "compromise" over what has been an economically and socially damaging piece of legislation. The broader LGBTQ population, though, says the act continues to discriminate against transgender and gender non-confirming people in the state. But what is the real deal? Does HB 142 overturn HB 2? Yes and no — well, mostly no.

Logistically, HB 142 does repeal HB 2 in that the bill, if signed by Cooper, would restore North Carolina to its pre-HB 2 days, according to CNN. But the new legislation would still allow businesses to discriminate against transgender North Carolinas. How? In the words of the Charlotte Observer editorial board, HB 142 "locks in HB 2’s most basic and offensive provision": barring local governments from passing their own anti-discrimination ordinance, such as the one in Charlotte that drew ire from state conservative lawmakers.

In other words, the Charlotte Observer writes:

It repeals HB2 in name only and will not satisfy any business or organization that is truly intolerant of an anti-gay environment and of a state that codifies discrimination.

Before HB 2 passed, North Carolina didn't have a law governing bathroom use in any way. That means local governments like Charlotte could enact their own policies that prohibited businesses and other entities from discriminating against people on the basis of sex or gender identity. But HB 2, also known as the "Public Facilities Privacy and Security Act," eliminated that possibility—and so does HB 142.

Under HB 142, municipalities, state agencies, and public entities in North Carolina cannot implement or amend rules dictating the public accommodation rules of private employers, according to the News & Observer. The legislation also bars cities from enacting anti-discrimination ordinances that determine how multiple-occupancy bathrooms, showers, or changing areas are used unless those codes are "in accordance with an act of General Assembly." These exceptions would be in place until Dec. 1, 2020, giving the federal courts enough time to rule on the public accommodation rights of transgender people.

What does it mean to be "in accordance with an act of General Assembly"? Cities and public entities would have to wait until the North Carolina legislature in Raleigh makes another move on the issue. So unless there's a governing act, local governments will have a nearly four-year moratorium on passing anti-discrimination ordinances that protect transgender people and the broader LGB population — never mind other groups like veterans and pregnant people, who might need similar protection from discrimination.

In short: HB 142 is a wolf in sheep's clothing. Although the new bill may not force transgender people to use accommodations that don't align with their gender identity, it doesn't stop that discrimination either. Instead, North Carolina's transgender population is left without any protections and any answers — and that's just as harmful as explicit bathroom bills.