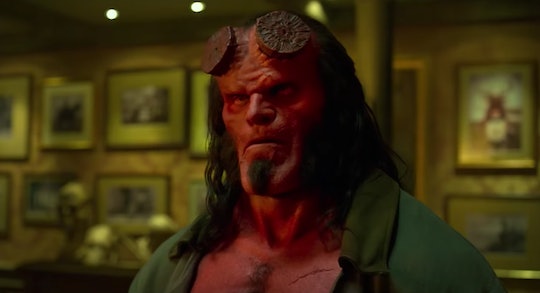 Move over, Avengers, there is about to be a new film franchise for people to fall in love with. The rebooted franchise, Hellboy, returns to theaters this week, and people will get sucked back in to the unlikely superhero on a mission to fight evil. But before people head to the theater, they'll want to know as much as they can before the movie starts. Of course, at some point, someone is going to wonder if Hellboy has a post credits scene. Although nothing is 100 percent certain, moviegoers will probably want to stick around to the very end for this one.

For people who were completely out of the Hellboy craze the first time it came around in 2004, then they're in for a treat. This 2019 rebooted film is about the unlikely superhero demon named Hellboy, who tries to save the world. But this film is not your average super hero movie. Hellboy himself is a darker, grittier superhero than most people are used to seeing in the average DC or Marvel superhero film. Not to mention, this new reboot has a lot of horror elements involved, as well, according to Heroic Hollywood.

The film's runtime is 120 minutes long, exactly, according to Heroic Hollywood. And although people might want to run out of the theater after the two hours are up, they should probably stick around. Although it hasn't been confirmed yet, it's very likely that there is a post credits scene at the end of Hellboy — and here's why.

Although Hellboy might be a bit scarier this go around (and has an R-rating to match the horror), it's still a light hearted superhero film, according to Empire. And if there is one thing that most superhero films have in common these days, it's that they all have a post credits scene, elaborating on one part or character of the movie, or hinting at what is to come in the next film. Almost all of these scenes are a super fun and hilarious wink towards the franchise. Although it hasn't been announced yet, it is super likely that there will be a second Hellboy film (if this one does well in the box office) — so of course there would be a post credits scene hinting about what might be to come.

But there is so much more to the film than just its post-credits scene. The movie, starring David Harbour (also known as Chief Hopper from Stranger Things), promises to be twisted, funny, and satisfying for fans of the comic book series (it's supposed to be very faithful to the source material, according to CinemaBlend), which is a tall order.

Harbour explained to CinemaBlend exactly why people will love this new interpretation of the character.

"Our color palette is a lot darker," Harbour said. "Hellboy has a lot more issues. He's a little more lost, a little more confused, and conflicted. I think that makes for a darker tone in terms of what he's willing to do."

Not only this, but the new reboot is promising fans closure since the last Hellboy franchise only delivered on two out of three of the promised films.

Hopefully this time, fans will get the closure they deserve and a post-credits scene that will keep them around for the next possible film.