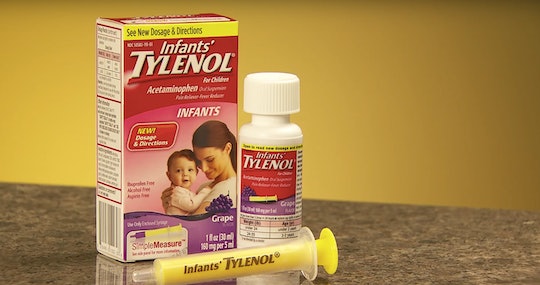 As the mother of a child with autism, I constantly wondered in those days of early diagnosis if it was something I did. Was it the food I ate or the city I lived in? I wondered about the foods I fed him, the medicines I administered. I questioned every bottle, every plastic, every soap and lotion I used with my son, because I desperately wanted answers. I'm not alone. Recently, there's been a bevy of internet fervor behind a possible correlation between specific medicines given to babies and autism. But does infant Tylenol cause autism?

There is an enormous difference between causation and correlation. The study most often cited when bloggers and your Facebook friends try to steer you away from infant Tylenol (acetaminophen), proclaiming it causes Autism (ASD), was a tiny control group study of 19 published in Autism Open Access. It was not a conclusive study. It showed a possible correlation between children who were given first acetaminophen and then ibuprofen to reduce fevers as babies. It showed a marked increase in cases of autism within that small, highly controlled group.

The unusual thing about this study is that it wasn't designed necessarily as research into infant Tylenol possibly being at fault for autism. Instead, it was looking at whether or not something called an "endocannabinoid stimulation" — an effect of the administration of Tylenol — could be used as a possible treatment for autism.

Of course there are other studies. The chief researcher on the endocannabinoid study had previously published a similar study linking acetaminophen and autism when the drug was administered after an MMR vaccine, according to Autism. Again, another survey study; another study with a small number of patients evaluated. It showed an increase in risk of autism with kids who were given acetaminophen after receiving an MMR dosage.

What it isn't saying is that these studies are only looking at children who were febrile at some point that required acetaminophen. Children who didn't receive the medicine or who did and didn't present with autism were excluded from the survey. They didn't evaluate if infant Tylenol causes autism in children who took it later or weren't febrile or weren't involved in the very small study.

Therefore, what these surveys may show is that something that happens to children who have recurrent fevers — which my son certainly did — and children who were frequently ill may be more likely to develop autism. Even that is a stretch considering the small sample pool. However, there is a bit more solid research in this area, with more than just quantitative data evaluated.

One of these studies not only looked at the metadata, but also examined the tissues themselves for their own study published in Frontiers in Physiology. What they found is interesting. Researchers suggest that ASD isn't just a disorder of the brain, but instead a systemic disorder and that people with ASD have greater oxidative stress levels and that increases inflammation.

These levels of oxidative stress and inflammation could increase the need for acetaminophen, noted the Journal of International Medical Research. The study didn't rule out acetaminophen exposure as a possible trigger, but didn't definitively draw that conclusion either, instead calling for more analysis. It's important to note when looking at this that the American Academy of Pediatrics (AAP), American Association of Family Physicians (AAFP), and the Food and Drug Administration (FDA) still recommend acetaminophen for fever and pain in babies.

I contacted Johns Hopkins University to find out if acetaminophen is still safe to give your baby, and Dr Barry Solomon tells Romper, "Yes, acetaminophen and ibuprofen are still the recommended medications for treatment of fever in infants and children." He went on to add, "It is very important for parents to understand how to measure and give the correct dose based on age and weight. It is also not recommended to alternate between acetaminophen and ibuprofen due to risk of unintentional overdose."

Speak to your pediatrician and determine what to do in the event of fever or pain and how you'll go about treating it. No one knows what causes autism, but the best we can hope for is more research. So you'll have to go with your gut and the advice of trusted medical professionals.