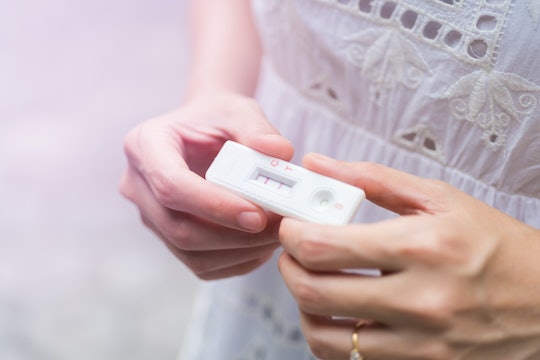 Does It Matter Which Pregnancy Test You Buy?

The first time I got pregnant, I tried to conceive for 18 months. That is roughly all of the dollars on fancy negative tests. On baby number two, I started buying the cheap tests. But does it matter which pregnancy test I buy?

These tests are looking for a hormone in the blood called human chorionic gonadotropin (hCG), which doubles in value every 72 hours after fertilization, according to the American Pregnancy Association. Some pregnancy tests, noted Craig Medical Laboratory, will register a very small amount of hCG in the urine, about 20 mIU/ml, while other tests require almost seven times that amount. But remember, that's only the difference of a few days.

The pricier store brands require lower levels of this hormone to trigger the positive test response, but this may also lead to unnecessary heartbreak because the pregnancy didn't hold.(Doctors recommend waiting until the day of the missed period to avoid this.) Testing too early might also end up as a false negative because your body hasn't built up enough of the hormone to be detectable by traditional store test, according to U.S. Health and News, leading you to believe you aren't pregnant, and possibly doing things you wouldn't otherwise do if you knew you were pregnant.

According to US News Pharmacy Times, expensive does not equate better when it comes to pregnancy tests. If you wait until the proscribed time of the day or after you miss your period, you are just as likely to get a correct result whether you bought one that practically throws a parade for a positive (or a pity party) when you pee on the stick, to the pipette into the pee and drop it on a test plate dollar store version. When I was trying for number two, I went all out and bought the two-for-a-buck Dollar Tree sticks, and I managed to pee on my hand just as readily as I did when I bought the pregnancy tests with all the bells and whistles. If you find one brand you love, go for it (and on it), but I'm telling you, you're peeing on your hand either way.