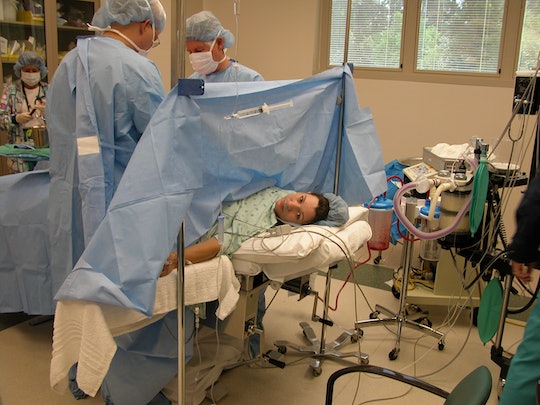 Does It Take Longer To Heal When It's Your Second C-Section?

Most pregnant women go into labor anticipating a vaginal delivery. However, the unexpected can occur making it necessary for the doctor to deliver your baby via a Cesarean, or C-section. The majority of first C-sections are unplanned, occurring after several hours of active and painful labor. But, if this is not your first time around the block, you may be asking if it take longer to heal with your second C-section.

If your repeat C-section is planned, your experience will likely be completely different than if your first was an emergency. Like many moms-to-be, you probably read all the books and took all the classes during your first pregnancy. You may have learned that according to the Centers For Disease Control and Prevention, approximately 32 percent of all births are Cesarean deliveries. You were also likely told that many doctors over perform C-sections for profit or convenience, even though the World Health Organization states that there is no justification for C-section birth rates to exceed 10-15 percent.

You went into labor adamant that you were going to bring this baby into the world old fashioned way — no drugs to speed along the process, no painkillers that could slow it down. Then, for reasons beyond your control, you ended up having an emergency C-section. After all of that preparation, it is not uncommon to feel sad or guilty that your birth experience wasn't what you had hoped. Jennifer Hamm, an OBGYN at Florida Hospital in Orlando ,told Babble.com that, "it’s important for new C-section moms to be reassured that they did everything they could for their babies, and that they didn’t do anything to cause the C-section."

Emergency C-sections occur when the life of the baby or the mother is at risk or if the labor is not progressing. The surgery, plus the trauma of a long and painful labor can make for an extended recovery, both physically and emotionally.

Some women who get pregnant after their initial C-section may be candidates for a vaginal birth after Cesarean, or VBAC, but others may be recommended for a scheduled C-section. According to recent studies, subsequent surgical deliveries may be safer than VBACs. Fox News reported on a study by Australian researchers who found that of the babies born via planned repeat C-section, 0.9 percent died or had serious complications, compared to 2.4 percent of babies born via VBAC. The study also found that 0.8 percent of mothers who had a repeat C-section experienced severe bleeding compared with 2.3 percent of those who had a VBAC.

If you must go through a repeat surgical delivery, it may be comforting to know that most of the women who share their stories in online advice forums like those found on BabyCenter's message board will agree that that they recovered more quickly from their second C-section. Maria Guido, Senior Editor for Scary Mommy, wrote that recovering from her scheduled second C-section was easier than the first because she could choose the time of her surgery, there was no rushing, and the doctors and nurses were calm and moved slowly and gently.

When it comes to C-section recovery times, so much has to do with your individual circumstances. Factors such as the type of anesthetic you are given, if you are having multiples, how many C-sections you have had in the past, your overall health, and how much help you have at home all play a role in your recovery. No two experiences are the same, and as always, talk to your doctor before making any important health decisions.