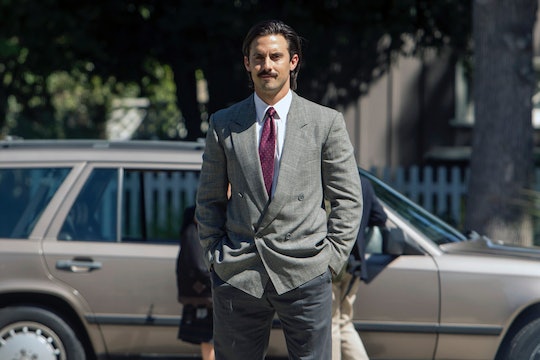 This Theory About Jack's Death Could Explain A Lot

Fans of This Is Us have been desperate to learn the cause of Jack's death ever since finding out his fate. The show has played coy when it comes to the details, only making it clear that Jack died during the triplets' teenage years and that his death was too painful for most of them to talk about. That left fans searching for explanations and seizing any little clues the show might have dropped. Many attributed Jack's demise to his alcoholism, but others interpreted Kate's anxiety on planes as a potential indicator that Jack may have died in a crash. So did Jack die in a plane crash on This Is Us?

Us Weekly recently commented on a fan theory from Tumblr that speculated that Jack died during the terrorist attacks on 9/11, possibly as a volunteer looking to help out. The timeline on that didn't quite pan out because the Big Three would have been in their early twenties in 2001 and they were shown to be teenagers at Jack's funeral. However, he still could have passed away in a plane crash. In addition to Kate's plane-related anxiety, Kevin destroyed all of his model planes following Jack's death, so there might be something to fans' theorizing.

Reddit user knuckle_cracker made an interesting connection that could explain Jack's cause of death. After pinning down the timeline a little more thanks to a timely movie reference, knuckle_cracker discovered a 1994 plane crash in Pittsburgh in which all passengers were killed. The location and timing makes it plausible as an explanation for how Jack passed away.

"It seems like Kate is clearly the most traumatized by Jack's death, so I got thinking... what if Jack was on the flight (business? maybe to fly to Rebecca on tour? — could be any number of reasons) and before it crashed, he was somehow able to call the house?" knuckle_cracker wrote. "Maybe Kate was on the receiving end and she was the one that got to speak to her father minutes, maybe seconds, before his death. This would explain the trauma and close connection that she has to Jack's death, and it would be one hell of a tear-jerker."

Laid out like that, it definitely seems like a possibility. However, another Reddit user going by harmony30 was quick to debunk it by pointing out that Jack was still alive in 1996. It's still possible that Jack could have died in a crash, but probably not that specific one. The details may change and the crash itself could be wholly fictional (if it even happens at all), but it could still make a lot of sense nonetheless and help to put these missing pieces together.