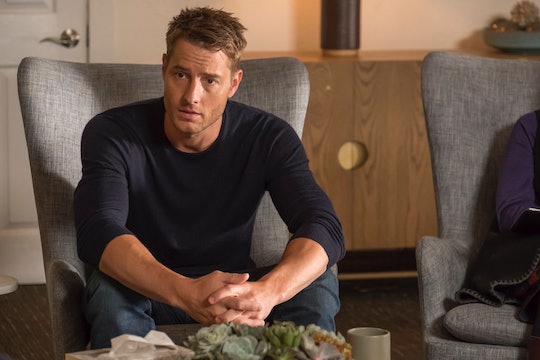 For a while now, there have been theories circling around that Jack died a hero on This Is Us. According to some theories, he died saving Kate and in others, he died saving her dog. But what if the victim was a different member of the Pearson family? Before the fire, Kate and Randall are accounted for in the house, so does Jack die trying to save Kevin on This Is Us? The theory might be hard to handle, but it could be true, especially since Jack left a note for Kevin the night before, which makes it seem like he didn’t know Kevin had stayed over at Sophie’s house.

Redditor Apopi recently posted the theory and attributed it to a couple of different little factors on the day of the house fire in the flashback of the episode "That’ll Be the Day." At night while Rebecca and Jack are in bed, Jack wakes up to the sound of the front door closing downstairs. He goes down to the kitchen to see Randall eating cereal after his Titanic date with his girlfriend. The first thing Jack said was, "I thought you were Kevin," which means he definitely didn't know that Kevin slept over Sophie’s the night before and expected him home that night.

Shortly after that, he left a note for Kevin on the basement door that said: "Kevin, if I don’t see you before work tomorrow, I love you. But you owe us an apology." If Jack thought Kevin was asleep in the basement with the cast on his leg, then of course he would want to do everything he could to hurry down there and save him in the fire.

Rebecca, on the other hand, did know about Kevin’s plans that night, but between planning out Big Three Construction with Jack and then heading up to the bedroom together, their son’s whereabouts for the night likely slipped her mind. This leaves Jack trying to get every member of his family out of the house in time, along with Kevin, who he may believe to be trapped in the basement with little to no way out.

Now, you might be wondering how this coincides with the other popular theory that Jack died trying to save Kate’s dog. While it’s not clear yet if that’s even true, the theory that Jack dies saving Kevin does take care of Kate’s issues with dogs as well. On Reddit, Apopi went on to say that maybe Jack tries to find Kevin and when he can’t, gets out of the house alive, but not before inhaling a lot of harmful smoke, so he’s taken to the hospital.

Kate, who insists on telling Kevin herself that their dad has been hospitalized, lies to him and tells him that Jack was trying to get her dog out of the house, and Kate has lived with the lie for years in order to protect Kevin. There are definitely some heavy layers to this particular theory, but it does explain both the note and Jack’s comment earlier in the episode with the house fire. It also makes sense when you pair it with the scene in th Season 2 premiere where Kate and Randall were at Miguel’s house.

At this point, Jack might not have been dead yet and when Kate said she needed to tell Kevin herself, it could have been referring to the fire and aftermath rather than Jack’s death just yet. Overall, it’s probably one of the more heartbreaking theories out there because it opens the door for Kevin to have even more guilt about his father than he likely already does. It also further shows Jack’s unconditional love for his children, who were sometimes not so easy to get along with, as most teenagers tend to be.

Jack’s actual death will finally be revealed in the "Super Bowl Sunday" episode, and although it’s what fans have been waiting for all this time, regardless of how it happens and how long it takes to get to the death itself, it’s going to break a lot of hearts.