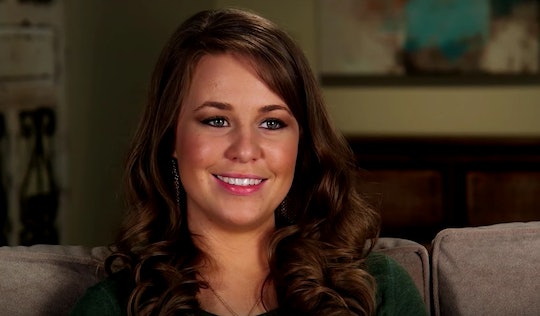 Those who are familiar with the Duggar family know they became famous for one reason in particular: Their ever-expanding family. By the time it was all said and done, Michelle and Jim Bob Duggar — who are openly against birth control for religious reasons — ended up with a whopping 19 children. As their older kids grew up and started families of their own, it became clear to fans of their TLC series that there's basically an accepted norm when it comes to the life cycle of a Duggar. Generally, they get married in their early 20s, move out of the family home, and then start having children almost immediately. Except for the oldest set of twins, Jana and John-David, 28, that is. With that said, you might be wondering if Jana Duggar still lives at home with her parents and other siblings, or if she's bent the rules and left the nest.

As recently as 2015 — still during the family's 19 Kids & Counting days — an episode featuring a makeover of the girls' bedroom at the Duggar home aired on TLC. For those not "in the know," instead of having separate bedrooms for all 19 of their children, Jim Bob and Michelle have their home set up with two huge bedrooms for their kids to share — one for the guys and one for the gals. And from the looks of it, Jana was still sleeping in the same bedroom as her sisters. She was in her mid-20s at that point, but this is likely because she isn't married, and Duggar women don't leave home until after they walk down the aisle, as In Touch Weekly reported.

Although there have been rumors about potential courtships through the years, Jana hasn't yet found the partner for her. "I don't really know what the next five years will look like," Jana said in a 2016 episode of Counting On. "Maybe I'll meet the one and get married and have kids and stuff. There have been different guys [to] come along and ask. But yeah, it's just not ... They haven't been the right one." Jana continued in the same episode:

I'm not just out to get married to the first one that comes along. I mean, sometimes it can be tempting. It's like, "Oh, I really want to be married," in those moments where your siblings that are married and have little boys, they're going on dates and doing their things. It's like this weird in-between stage. You know, I'm not a younger one — but then I'm not an older, married one with kids. And so just being busy with where god has me right now and being content in this place, and learning as much as I can.

In the meantime, it seems as if Jana keeps herself busy by helping take care of her younger siblings, cooking, gardening, helping with home improvement projects, etc. Because she's in her late 20s and remains unmarried, many Duggar fans and critics have referred to Jana as "Cinderella," according to In Touch Weekly — not-so-subtly hinting at the idea that Jim Bob and Michelle are making her to stay at home to help take care of things.

Although Jana was once serving as a doula and a midwife's assistant, it doesn't seem that she has continued along that path. Michelle and Jim Bob gave did a birthday update on their oldest set of twins via the Duggar Family official Facebook page back in January 2015. John David had recently earned his pilot's license at the time and was keeping busy with police and construction work. As for his twin? "Jana is a concert pianist and is involved in many ministries," they wrote.

And in recent episodes of Counting On, Jana's impressive gardening on the family's property has been featured, as well as her interior decorating skills. She's definitely keeping busy, that's for sure.

So yeah. Jana Duggar is 28 years old, still living at home with her parents, and apparently still sleeping in the girls' bedroom with her younger sisters. And her most recent five-year plan was to ideally get married, but work on her "skills" in the meantime. But hey — as long as she's happy and following this path by her own freewill, I have a difficult time criticizing Jana for still living at home. You do you, girl.

More Like This
Melanie Lynskey Hailed Her Nanny As An "Absolute Angel" While Accepting An Award
Hannah Waddingham Used To Take Her Daughter To Work When She Was A Baby
Kylie Jenner Reveals That Her Mom Kris Basically Delivered Stormi
Nick Cannon Announced The Birth Of His 9th Child, A Daughter Named Onyx