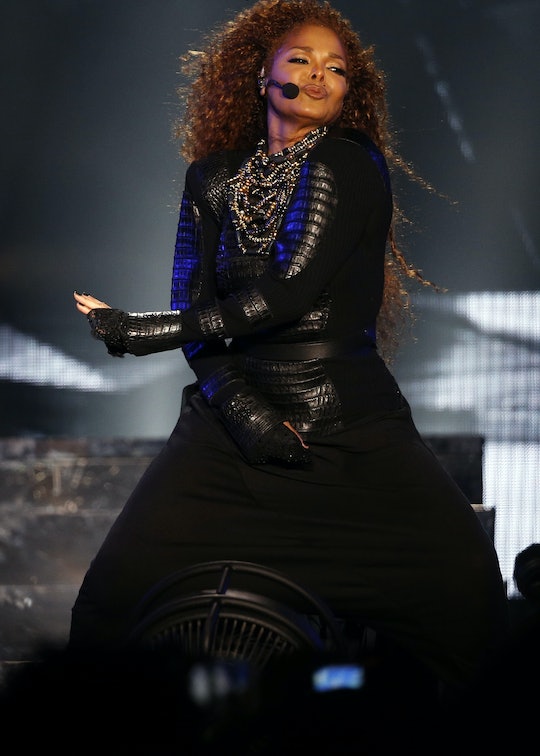 Does Janet Jackson Have A Daughter?

Congrats are in order for Janet Jackson, who became a new mom at 50 after giving birth to her son, Eissa, on Tuesday. But if rumors are to be believed, he might not actually be her first child. Does Janet Jackson have a daughter? It seems outlandish to think that Jackson could have mothered a secret child years ago with no one knowing about it, but rumors have actually been swirling for years, according to Entertainment Tonight. And the fact that Jackson is incredibly adept at keeping some major life events a secret from the public — her eight-year marriage to second husband Rene Elizondo only became public when the couple separated in 1999, according to Rolling Stone, and her current marriage to Qatari businessman Wissam Al Mana wasn't revealed until a year after they wed in 2012, according to The Telegraph — likely isn't helping to put the claims to rest.

The rumor about Jackson's alleged secret daughter seem to stem from comments made by her first husband, singer James DeBarge, whom she married in 1984. The marriage was annulled just one year later, but in a clip from WE TV's Growing Up Hip Hop, DeBarge can be seen admitting to his daughter, Kristinia, that he believes he and Jackson did have a daughter together during their brief marriage, but that she kept it from him. DeBarge said,

I'm tired of the secrecy. I'm tired of the truth not coming forward, and people being a coward when it comes to it. And I thought it was wise for me to speak out now because it needs to be addressed.

To be honest with you, I didn't know. I was under the impression that there was no baby, and I wanted to believe it's not true. But it is.

Jackson herself has never commented publicly on the claim, and her rep has not responded to Romper's request for comment. But the allegation that Jackson and DeBarge had a daughter together isn't a new one: according to Radar Online, Star Magazine claimed in 1994 that Jackson had become pregnant during the marriage, and put their daughter up for adoption without telling DeBarge. In one article, DeBarge’s mother, Etterlene, claimed that after getting pregnant, Jackson "went away," and after returning, decided to end the marriage to her son. She told the magazine, “I saw Janet before she left, and from what I could see, she was definitely pregnant. She wasn’t fooling anyone.”

When news of Jackson and Al Mana's pregnancy became public, the rumors resurfaced, and in an interview with Radar Online in May, DeBarge said a young woman who claimed to be his daughter with Jackson contacted him by email in 2014. He clarified that he hadn't met her in person, and that she hadn't taken a paternity test (although DeBarge said she offered to take one), but that the woman alleged she found out she was Jackson and DeBarge's daughter after her adoptive mother "confirmed it on [her] deathbed” before she died.

Although DeBarge said he previously hadn't known for sure whether Jackson had in fact actually been pregnant, he believed the rumors enough to investigate them, hoping to find answers. He told Radar Online,

I hadn’t known [that Janet had a baby]… not for sure. I went on a search. Someone went through some serious changes to make it impossible for me to find. This had to be some serious inside work being done with the paperwork. Someone was working with them.

Although DeBarge told Radar Online he was "hurt" to think that Jackson had kept their daughter a secret from him, he also said he understood why she would have done it:

Fear and lots of pressure. From every angle, from inside and outside … Not knowing how it could hurt her career. A lot of outside influences were involved in our whole relationship to where we didn’t have a chance from the gate.

If the rumors are true, then it sounds like a pretty heartbreaking reality for everyone involved. Both Jackson and DeBarge were young at the time of their marriage — Jackson was still in her teens — and coming from a family as famous as hers would have no doubt made it difficult for her to navigate a pregnancy if perhaps she felt they weren't accepting. And while DeBarge seems to have spent many years carrying the burden of their alleged secret daughter, even while raising subsequent children later on, Jackson spoke over the years about her own desire to be a mother, according to The Telegraph, and said in 2010 that she'd “love to have a family," adding, "if it’s meant to be, I’ll have one. I hope it does.”

Of course, it's also entirely possible that the allegations by DeBarge and his family are baseless, and that talk of Jackson mothering a daughter in secret and giving her up for adoption without telling him is just one of many claims that have surrounded the Jackson family over the years. All we know for sure, at least, is that now, Jackson is most definitely a mother, and that, according to CNN, she "had a stress-free healthy delivery" with her son. In an exclusive interview with People in October during which she confirmed her pregnancy, Jackson said that she and Al Mana "thank God for [their] blessing," and shared a photo of her growing pregnancy bump.