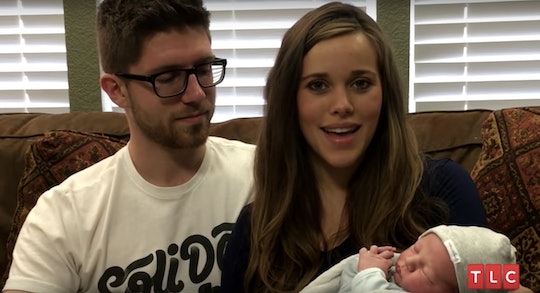 With two kids in her crew already, 24-year-old Jessa Duggar (well, Seewald now) is creating a home that more and more resembles the one she grew up in. But does Jessa Duggar want a big family? Coming from the TLC-famed brood featured on 19 Kids And Counting, she has quite a ways to go.

Prior to Henry, Jessa and Ben were exploring adoption as an option. "There are so many kids out there who are longing for the love of a family, and we feel strongly about opening our hearts and our home to welcome them in," she shared with Us Weekly in May of 2016. At the time, she also noted that they were looking to "adopt many kids," though, for them, "it’s not really about any specific number."

But that number could easily be a high one, seeing as "Ben jokes about wanting 15 sons, but I imagine we will probably have a good mix of boys and girls," Jessa revealed. It's not quite 19, but still, 15 kids is quite the undertaking.

In the short video below, Jessa and Ben welcome their new baby while talking about the family dynamic that they're hoping for — one where Spurgeon and Henry are pretty much inseparable:

I think it's really awesome that we have two little boys so close together in age. I know they're going to be best friends and love growing up and doing everything together, so I'm looking forward to seeing that.

Big families feel the most familiar to Jessa, but the reason why the Duggars have so many children is rooted in loss. As Michelle Duggar shared with The Christian Broadcasting Network:

We had our first child, Josh, four years in to marriage and then I went back on the pill. Then I ended up getting pregnant while on the pill and I lost that baby. I had a miscarriage. At that point we really began to evaluate what we were thinking. With our own hands, with our own lack of knowledge we had destroyed our own baby. And that was devastating.

Thus, Michelle and Jim Bob have 19 children, all with names starting with "J." Jessa's established a naming tradition of her own, however, opting for unique and nonconventional names. In fact, baby Henry Wilberforce is named after Christian Evangelical and abolitionist William Wilberforce, People reports.

All of this love for family indicates that Jessa and Ben are only just getting started. Whether through traditional means or by adoption, a forever-growing fam definitely seems like a high priority for the young couple.